Belgrade-born Novak Djokovic left for Munich when he was 12 in 1999 just as NATO rained its bombs on Serbia. His French Open quarter-final opponent Milos Raonic was born in Podgorica, the capital of Montenegro, but his family decamped to Canada in 1994 when he was just three.

Novak Djokovic and Milos Raonic, two men who left the strife-torn Balkans when they were children, meet for a place in the French Open semi-finals on Tuesday. 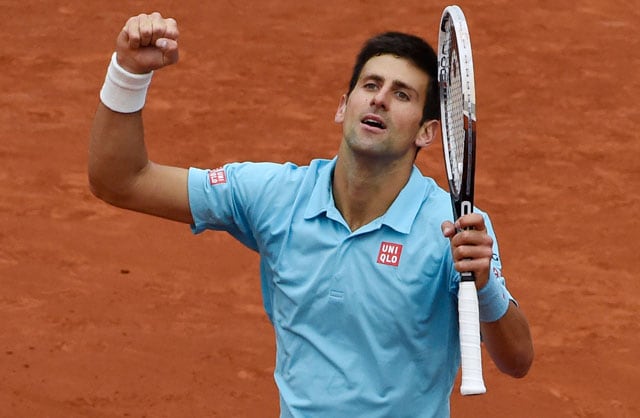 World number two Djokovic, the 2012 runner-up in Paris and seeking a first French Open title, starts as overwhelming favourite against Raonic, just the fourth Canadian man to make the last-eight of a major.

As well as their professional aspirations, the two men share a common bond of careers forged from their upbringing in the chaos of a crumbling Yugoslavia in the 1990s.

Belgrade-born Djokovic left for Munich when he was 12 in 1999 just as NATO rained its bombs on Serbia.

Raonic was born in Podgorica, the capital of Montenegro, but his family decamped to Canada in 1994 when he was just three.

"I remember watching him play. I think he was a 16-year-old then, against I can't remember who he lost, maybe Marcos Baghdatis in the Orange Bowl Under 18," recalled Ranoic.

"I was under 14 then or so, and we were just there for a day watching. We have a good relationship. Very friendly. Same type of cultural upbringing and background, so we understand each other a lot, especially because of the language, as well."

That familiarity will be put aside on Tuesday at Roland Garros.

Djokovic, chasing a Roland Garros title to become just the eighth man to complete a career Grand Slam, is playing in his 20th successive quarter-final at a major, a streak which began at Wimbledon in 2009.

The odds are stacked against Raonic who will be playing in his first quarter-final and has lost both his previous matches against Djokovic although he did push the Serb to three sets in the Rome semi-finals last month.

"Milos is playing the tennis of his life. He's top 10 now, an established top?10 player. He has one of the best serves in the world. Very powerful, very precise," said Djokovic of a man who has unleashed 72 aces in four rounds so far.

"When he serves that well, there is not much you can do, really. He puts a lot of pressure on his opponent, and he has improved a lot from the baseline now.

"With his backhand he's hitting down the line, he's very aggressive, which he should be, of course, for somebody of his height and his build.

"I know that I'm going to have to face somebody that is going to serve over 200 kilometres per hour in average throughout the whole match. But I'm ready for that."

Tuesday's other quarter-final features sixth seeded Tomas Berdych against Ernests Gulbis, the big-hitting, controversial Latvian who sent Roger Federer crashing to his earliest defeat in Paris for a decade in the fourth round.

Berdych, a semi-finalist in 2010, has progressed without fuss through the draw with his garish, flower-print shirts garnering more attention than his results.

In contrast, Gulbis finds it impossible to keep a low profile.

On his way to his first quarter-final at a major since 2008 when he also made the last eight at Roland Garros, the 25-year-old followed up his comments regarding women in tennis with a five-set demolition of 17-time Grand Slam title winner Federer.

"I want to be myself. I'm not competing with anybody. I am not here to entertain you, to give you great quotes. If it happens, it happens. If not, you can write that I am boring and that I don't like something, that's fine with me," said the man from Riga.

Berdych leads Gulbis 4-2 in career meetings, winning their only match on clay in Nice in 2011.