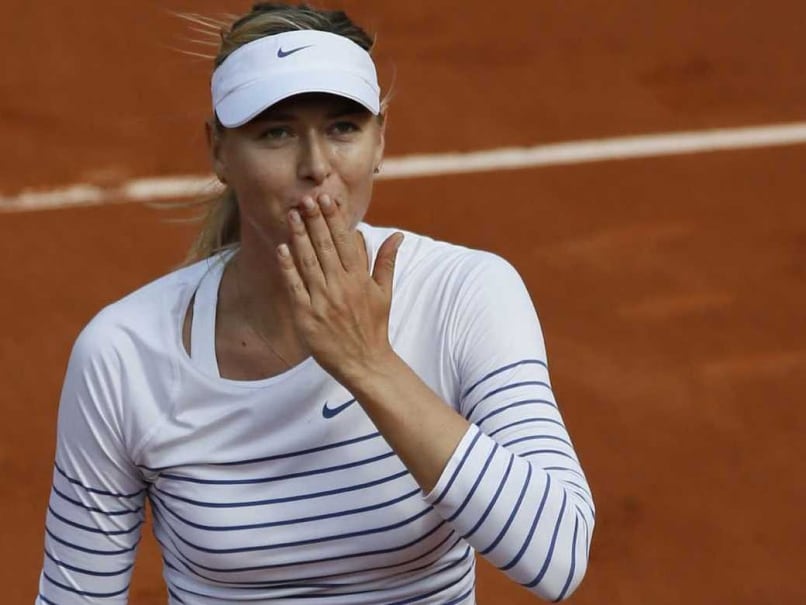 Reigning champion Maria Sharapova brushed aside fellow Russian Vitalia Diatchenko to reach the last 32 of the French Open on Wednesday.

Sharapova, who was also champion at Roland Garros in 2012 and runner-up in 2013, defeated Diatchenko 6-3, 6-1 in the first match on a sun-drenched Court Philippe Chatrier to set up a clash with former finalist Samantha Stosur in the third round.

The second seed exchanged breaks with her Fed Cup teammate early on but went on to win the opener 6-3, Diatchenko double-faulting on set point.

Sharapova then broke right at the start of the second set to lead 2-0, and although Diatchenko saved a first match point to pull it back to 5-1, she could not stop her more illustrious compatriot closing out the match in the following game.

Stosur of Australia, the runner-up in 2010 who is seeded 26th this year, breezed past French wildcard Amandine Hesse 6-0, 6-1 on Court Suzanne Lenglen.

Stosur and Sharapova also met in the last 16 a year ago, with the Russian prevailing in three sets.

"She's always a tough opponent and loves playing on clay. But I have a good record against her and I hope I can continue that," said Sharapova -- who has been struggling with a cold and once again avoided the traditional on-court interview post-match -- of her next opponent.

Other women's seeds to advance early on Wednesday were Czech 13th seed Lucie Safarova, who was a 6-2, 6-0 winner against Kurumi Nara of Japan, and Germany's Sabine Lisicki, seeded 20, who won the first set 6-1 against Daria Gavrilova of Australia before her opponent retired injured and in tears.

The 2009 French Open winner Federer, who is safely in the other half of the draw to Novak Djokovic, Andy Murray and reigning champion Rafael Nadal, was in action against Spain's Marcel Granollers on Court Suzanne Lenglen.

Kei Nishikori, the fifth seed who was the only one of five Japanese players in the initial men's draw to have made it through to the second round, faced Thomaz Bellucci of Brazil.

French 12th seed Gilles Simon gave the locals something to shout about by defeating Martin Klizan of Slovakia 7-5, 6-2, 6-3.

Meanwhile, Luxembourg's Gilles Muller and Italy's Paolo Lorenzi waited to recommence their match, which was suspended due to darkness on Tuesday evening at the start of the fifth set, with the prize on offer a second-round meeting with Djokovic.

Comments
Topics mentioned in this article
Maria Sharapova Samantha Stosur Tennis
Get the latest updates on India vs England Series, India vs England , live score and IPL 2021 Auction . Like us on Facebook or follow us on Twitter for more sports updates. You can also download the NDTV Cricket app for Android or iOS.