Maria Sharapova may have tasted the the atmosphere of a last-four match on Philippe Chatrier court but Eugenie Bouchard is bidding to become the first Canadian in a Grand Slam final ever. The two face off in the French Open semis. 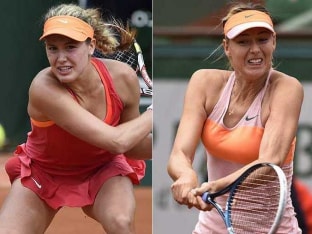 Eugenie Bouchard clashes with childhood idol Maria Sharapova in the French Open semifinals on Thursday in a match-up which ticks all the right marketing boxes for the women's tour.

The 20-year-old Bouchard is also bidding to become the first Canadian woman to reach a Grand Slam final as she takes on the Russian former number one.

"I have a picture with her when I was I think seven or eight years old. I guess that would be the first time we met. I think it was in Miami," said the bilingual blonde.

The photo shows a shy Bouchard, in a blue T-shirt and shorts, being dwarfed by a 15-year-old Sharapova who is dressed in a prim white tennis dress.

"Yeah, I mean, you know, I looked up to her for sure." Sharapova, who has won each of the Grand Slams once, has beaten Bouchard in their two previous meetings including at Roland Garros 12 months ago.

"Someone like Eugenie who has been up and coming for a couple of years, I think this is the year where she's really broken through, especially at the Grand Slams, playing at a high level," said Sharapova.

"Last year was the last time that we faced against each other (Sharapova winning in straight sets in the French Open second round). It was the second round, and this year we're in the semifinals."

Simona Halep, the only woman left who has yet to lose a set, made short work of 2009 champion Svetlana Kusnetsova in her quarterfinal as she keeps alive her quest to become the first Romanian since her manager Virginia Ruzici in 1978 to win the French Open

When she came into the tournament last year in the French capital, she was ranked 57 in the world and was knocked out in the first round by Spaniard Carla Suarez Navarro, the 14th seed who lost to Bouchard in the quarterfinals.

This year, she is ranked world number four, playing her first Slam semifinal and enjoying a spell in which she has won seven tournaments in just over a year, a tally bettered only by Serena Williams

"I'm happy, and I really want to look forward for the next round because it is my first semifinal at a Grand Slam, and I have to be very focused, very calm, and to try to do everything on court," she said.

Halep tackles German 28th seed Andrea Petkovic who peaked at world number nine in 2011, her finest season before injuries derailed her career and sent her plunging to 177.

Back, knee and ankle problems almost forced her to give up the game in 2013 and on her last visit to Roland Garros, she failed to get through the qualifying rounds.

"The pressure comes hand in hand with this excitement. I'm just so scared that it might slip away again," said Petkovic.

"I was the happiest when I was in the top 10 and was one of the top players, and then it was just taken away from me."

Petkovic won the last of her three WTA titles, all on clay, earlier this year at Charleston, three years after Strasbourg and her breakthrough victory in 2009 at Bad Gastein.

She is the first German to reach the semifinals since 1999 when Steffi Graf went on to win the last of her Open era record of 22 Grand Slams.