She knows how to play ferocious tennis but that is not all that has defined Maria Sharapova - tennis' glamour girl - in the last ten years since she has made waves internationally. 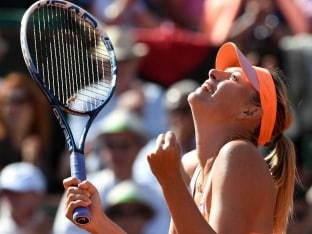 Maria Sharapova exploded onto the international scene 10 years ago as a 17-year-old with a spectacular straight sets demolition of Serena Williams in the 2004 Wimbledon final.

On Saturday at Roland Garros she hopes to end a decade of top tennis by defeating Simona Halep of Romania for her fifth Grand Slam title.

The odds are all in the Russian's favour. The 27-year-old glamour girl is the biggest name in women's sport, a global icon, and the holder of four Grand Slam titles, the last coming in Paris two years ago when she became just the seventh woman in the Open era to complete a career sweep of the four major titles.

Halep, an unassuming 22-year-old from the Black Sea port city of Constanta, will be playing in her first Grand Slam final, having struggled, like many before her, to make the transition from junior to senior level.

But all the signs are there for one of the most intriguing French Open women's finals in years and, many hope, the first to go to three sets since Jennifer Capriati defeated Kim Clijsters 12-10 in the third in 2001.

Halep, who has broken into the top bracket of women's tennis in the last 18 months, has by far the most impressive figures of the two in this year's tournament.

She has reached the final without dropping a set, while Sharapova in her last three matches has had to go all the way after losing the first set.

That never-say-die attitude has given the former world number one the remarkable record of winning 19 times in a row on clay when she has had to play a deciding set.

One of those came against Halep the last time the two met in the final of the Madrid Masters four weeks ago when Sharapova came through 1-6, 6-2, 6-3.

Sharapova is admirative of the Romanian's all-court game. "I think in the last year she's proven that's she's able to have great results consistently," she said.

"And in terms of ranking and where she's positioning herself, I think that's a very great quality in a player, to be able to be so consistent from week in week out.

"I think she won six titles last year. That's pretty impressive. So obviously to be in that position, I mean, she deserves that. That's a position I want to be in, you know, so I'm gunning for that."

Halep for her part believes that her play in reaching the final, without dropping a single set, validates her first ever appearance in a Grand Slam final.

The final for her will be the icing on the cake. "Yeah, for sure. I have nothing to lose," she said. "I will keep this in my mind always. I will try to hit very relaxed," she said.