The French pair of Julien Benneteau and Edouard Roger-Vasselin beat Spaniards Marc Lopez and Marcel Granollers 6-3, 7-6 (1) to become the first French team to win the men's doubles title at Roland Garros since Yannick Noah and Henri Leconte in 1984. 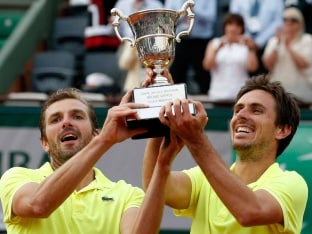 Julien Benneteau and Edouard Roger-Vasselin won their first Grand Slam title by defeating Spaniards Marc Lopez and Marcel Granollers 6-3, 7-6 (1) in the men's doubles final of the French Open on Saturday.

They became the first French team to win the men's doubles at Roland Garros since Yannick Noah and Henri Leconte in 1984.

"It was repeated to us. We knew that before," Roger-Vasselin said. "We took time to discuss the match from the tactical point of view, and also the emotion that we would feel."

After winning, Benneteau and Roger-Vasselin threw their rackets, hugged each other, and ecstatically bounced on the court.

"This is the best moment of my career, almost of my life," Roger-Vasselin said.

The two Frenchmen held back their tears while giving a speech after receiving the trophy. The crowd even sang the French national anthem "La Marseillaise" to celebrate.

Benneteau and Roger-Vasselin broke for a 5-3 lead in the opening set. They then blew a 3-1 lead in the second set but won the last four points in the tiebreaker, clinching the victory when Lopez netted a volley. They combined for four aces and no double-faults.

"We were in our bubble. We were very much focused on the match from A to Z," Roger-Vasselin said.

Granollers and Lopez were bidding to become the first Spanish team to win the men's doubles at the French Open since Sergio Casal and Emilio Sanchez in 1990. They won the ATP Finals in 2012.

This was only the third time that Benneteau and Roger-Vasselin played together in a Grand Slam tournament.