Andrea Petkovic had some trouble holding serve, but her ground strokes consistently landed near the lines, many of them for winners. 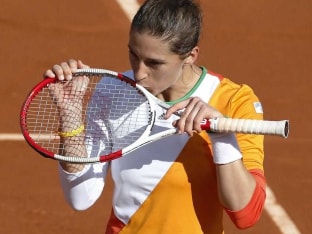 Andrea Petkovic advanced to her first Grand Slam semifinal, beating Sara Errani of Italy 6-2, 6-2 at the French Open on Wednesday.

Petkovic had some trouble holding serve, but her groundstrokes consistently landed near the lines, many of them for winners.

The 28th-seeded German had been 0-3 in major quarterfinals, losing at that stage at the Australian Open, French Open and U.S. Open in 2011. Her ranking dropped after that, as low as 177th last year, because of a right knee injury.

Errani was the runner-up at Roland Garros in 2012, losing to Maria Sharapova. Last year, the 10th-seeded Italian reached the semifinals and lost to eventual champion Serena Williams.

Sponsored by Vuukle
Comments
Topics mentioned in this article
Tennis
Get the latest updates on Fifa Worldcup 2022 and check out  Fifa World Cup Schedule, Stats and Live Cricket Score. Like us on Facebook or follow us on Twitter for more sports updates. You can also download the NDTV Cricket app for Android or iOS.