Amanda Anisimova is the youngest American woman to make the last four at a major since Venus Williams at the 1997 US Open. 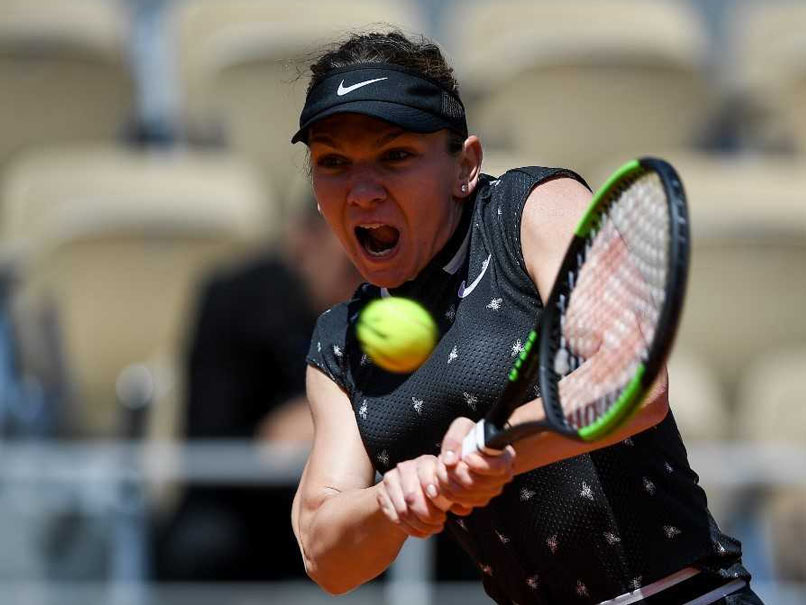 Simona Halep was knocked out after losing 2-6, 4-6 to Amanda Anisimova.© AFP

"This is more than I could have asked for," said Anisimova, who is the youngest player to reach a major semi-final since Czech Nicole Vaidisova at the 2007 Australian Open.

She is also the youngest American woman to make the last four at a major since Venus Williams at the 1997 US Open, and the youngest to reach the semis at Roland Garros since Jennifer Capriati in 1990.

"I knew if I wanted to win today I would have to do something different because it wasn't going to be easy," Anisimova added.

"I'm really happy with the performance because it's one of the best matches I've ever played."

The defeat for third seed Halep means it has now been 12 years since the last successful title defence in Paris -- Belgian Justine Henin's third straight triumph in 2007.

The winner of Anisimova's clash against Barty will face either Britain's Johanna Konta or Czech 19-year-old Marketa Vondrousova in the final.

It is the first time two teenagers have reached the semi-finals at a Grand Slam for 10 years, while it had not happened at Roland Garros since Henin and Kim Clijsters in 2001.

Anisimova crushed 25 winners past a bewildered Halep, who made 17 unforced errors and served two double faults.

Halep's run of breaking in 16 consecutive return games was swiftly ended by Anisimova's big hitting, and the American broke serve in fifth game en route to a 4-2 lead.

She saved a break point and then dismantled the Halep serve once more to seal the opening set in under half an hour.

Halep, who had thrashed 18-year-old Pole Iga Swiatek 6-1, 6-0 in the fourth round, faced being on the wrong end of a similarly one-sided match when she fell 3-0 down in the second.

Anisimova tightened up with the semis in sight and the defending champion fought back to 4-4, but the youngster gathered herself to save a break point in the next game and then grabbed her first match point with a glorious backhand winner up the line.

Barty also won in relative comfort on Court Suzanne Lenglen to go one better than her run to the Australian Open last eight earlier this year.

The 23-year-old was too consistent for American Keys, hitting 16 winners and four aces.

Keys, a semi-finalist at Roland Garros last year where she lost to Sloane Stephens, was undone by 26 unforced errors.

After a tight start to the match, Barty claimed the opening set courtesy of a single break in game eight, before clinching a one-set lead on her fourth set point.

The second set followed a similar pattern to the first, until Barty stumbled at the finish line and was broken when serving for the match.

But Keys gifted her the advantage straight back with an error-strewn game, and former professional cricketer Barty made no mistake second time around.

Comments
Topics mentioned in this article
Simona Halep Tennis
Get the latest updates on T20 World Cup, check out the T20 World Cup Schedule and Live Score . Like us on Facebook or follow us on Twitter for more sports updates. You can also download the NDTV Cricket app for Android or iOS.