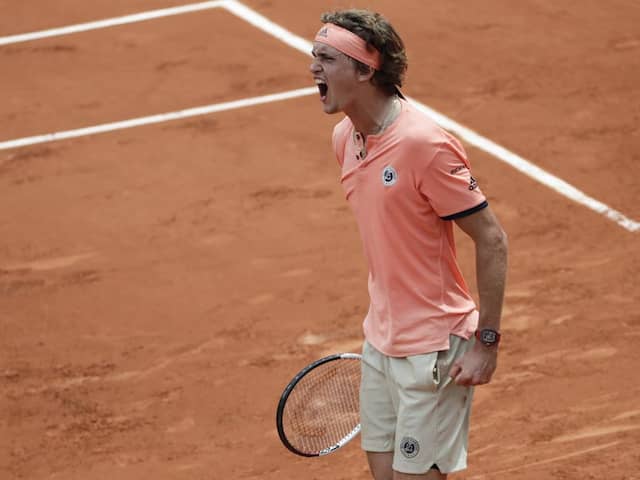 German second seed Alexander Zverev saved a match point and survived a second successive French Open scare on Friday, coming back to defeat Bosnia's Damir Dzumhur in five sets to reach the fourth round for the first time. World number 29 Dzumhur also served for the match in the fourth set, but Zverev clung on and battled to a 6-2, 3-6, 4-6, 7-6 (7/3), 7-5 victory. Zverev, 21, who is seen as the main threat to Rafael Nadal's expected coronation as a champion for an 11th time, endured a nightmare outing on Court Philippe Chatrier before claiming victory after almost four hours of play. He hit 73 unforced errors, dropped serve eight times and served up seven double faults. He had to save a match point in the 10th game of the decider before breaking and holding to make the last 16 for the first time where he will face either French 15th seed Lucas Pouille or Russia's Karen Khachanov.

"It was an amazing, high level match," said Zverev.

"It was the first time I have won on this court and I hope there are many more to come."

Zverev, who also had to fight back from two sets to one down in the second round against Serbian Dusan Lajovic, is looking to become the first German man to win the title since 1937.

But he has never reached a Grand Slam quarter-final, although the longer best-of-five format has worked twice in his favour now at Roland Garros.

"You have to draw the line and, you know, look for the next chapter," said the world number five.

"Also, in tennis you never know one week can always turn things around for you. It's been proven to work in the past."

The 34-year-old Verdasco will next face either his compatriot Roberto Bautista Agut or former champion Novak Djokovic for a quarter-final spot.

It is the seventh time the world number 35 has reached the French Open fourth round, but it is the only Grand Slam tournament where he is yet to make the last eight.

Japan's Kei Nishikori made short work of home hope Gilles Simon as he cruised into the fourth round for the fifth time.

The 13th seed missed a match point on her own serve in the second set, but then saved two set points in a tie-break before an Osaka double fault sent the American through to a last-16 tie with 31st seed Mihaela Buzarnescu.

Buzarnescu, a 30-year-old Romanian who had never won a Grand Slam match before this week, downed fourth seed Elina Svitolina with a shock 6-3, 7-5 victory.

Comments
Topics mentioned in this article
Alexander Zverev Grigor Dimitrov Tennis
Get the latest Cricket news, check out the India cricket schedule, Cricket live score . Like us on Facebook or follow us on Twitter for more sports updates. You can also download the NDTV Cricket app for Android or iOS.