Federer holds off Monaco in Miami

Roger Federer fought through a tough first set and turned it on in the second to beat Juan Monaco 7-6 (7-4), 6-4 as the Swiss clocked his 20th win of the season to advance at the Miami ATP Masters 1000. 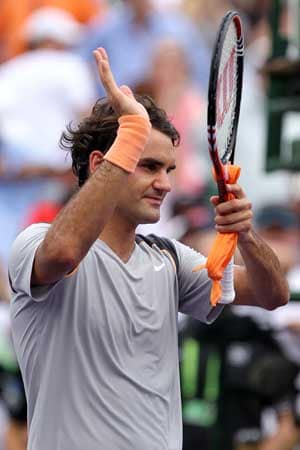 Roger Federer fought through a tough first set and turned it on in the second to beat Juan Monaco 7-6 (7-4), 6-4 as the Swiss clocked his 20th win of the season to advance at the Miami ATP Masters 1000.

The third seed, who won the event at Crandon Park twice, improved his record on the season to 20-3 in a campaign dominated so far by the 20-match win streak of second-seeded Serb rival Novak Djokovic.

Federer's clean and clinical third-round victory Monday in one and three-quarters hours over the Argentine, improved his overall Miami mark to 38-10.

"It was tough not having played him very often," said the Swiss. "This is as slow as it gets out on the hard court. It's a bit of clay almost except that you can't slide.

"I thought he played well in the later stages of the first set and then also in the second. I had a return game which worked well, and was able to serve it out. So it was a good finish for me."

In women's play, Caroline Wozniacki's dream of a coast-to-coast title double hit the wall as the top seed was upset 7-5, 3-6, 6-3 by Germany's colourful Andrea Petkovic.

The winner, already an internet, YouTube and Twitter personality thanks to her prodigious use of social media, performed a snippet of her jiggy "Petko" victory dance after the upset in just under two and a half hours.

"It was not like I played unbelievable," said the German. "It was more that I was able to stick to my game plan and I was playing clever. That was the key to the match."

Petkovic, ranked 23rd and who made a quarter-final at the Australian Open, needed an hour to win the opening set against Wozniacki, who claimed the Indian Wells Masters in California eight days ago and had been bidding to repeat on the East coast in Florida.

Petkovic went up 4-2 in the third set on a break and three games later was into the quarter-finals after firing her third ace of the afternoon on match point. She faced 17 break points but saved 12 of them against the world number one Dane.

The Australian who lost the Roland Garros final last year to Francesca Schiavone suffered with five double-faults and no aces in a contest lasting 81 minutes.

"I have a good record against her, but it's not something that you typically look at going into the match," said Sharapova, who missed months over the past few seasons with a shoulder injury which eventually required surgery.

"I know that she's a very tough player.

Sharapova produced her best result so far this year at Indian Wells this month as she played her first semi-final since last August.