Roger Federer defeated Michael Llodra 6-0, 7-6 (6) to reach the second round of the Dubai Championships on Tuesday. 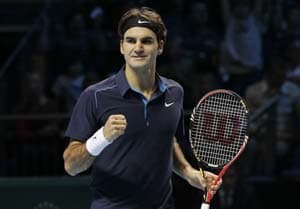 Roger Federer defeated Michael Llodra 6-0, 7-6 (6) to reach the second round of the Dubai Championships on Tuesday.

The second-seeded Federer needed only 17 minutes to win the first set, dictating play on his serve and using a solid net game to break the Frenchman three times. The second set was a much tighter affair, as both players held their serve throughout.

Llodra, coming off a final loss to Juan Martin del Potro in Marseille, went up 6-5 in the tiebreaker when Federer hit a return long. But Federer saved the set point and then ran off the final two points to win the match in just over an hour.

Federer is looking for his fifth title in Dubai. He'll face Feliciano Lopez, who beat Nicolas Mahut of France 6-4, 6-4.