Roger Federer tightened his grip on the world number one ranking after a crushing 6-0, 7-6 (9/7) defeat of Novak Djokovic to win a sixth title this season at the Cincinnati Masters. 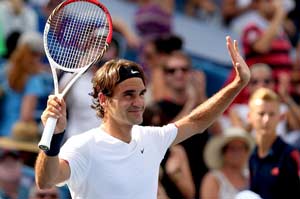 Roger Federer tightened his grip on the world number one ranking after a crushing 6-0, 7-6 (9/7) defeat of Novak Djokovic to win a sixth title this season at the Cincinnati Masters.

The Swiss will take a healthy points lead of nearly 900 into the US Open, where number two Djokovic is defending the title, starting on August 27.

ATP calculations show that the 31-year-old Federer will maintain the top spot through the end of the season's last Grand Slam.

He begins his record 292nd week atop the table on Monday flushed with his fifth career title in Cincinnati from as many finals.

The Swiss top seed got through a perfect week without losing serve to capture his 76th career trophy.

It was also his 16th win in 28 meetings against world number two Djokovic and it means he will go into New York as the clear favourite having become the first man to win five titles at the Cincinnati event.

The Swiss described his effort as "another amazing week".

"I've had a magical summer (seventh Wimbledon title, London Olympic silver medal). I feel good about New York - but I'm going to savour this one for a bit.

"I've been able to win five. It's obviously incredible because I remember the first few here I struggled.

"Now looking back it's just unbelievable. Plus this was probably the best week ever here in Cincinnati for me never dropping my serve and beating Novak in the final. This was very sweet. No doubt about it."

Federer said the victory proved to himself that his resilience remains.

"For me to come here somewhat rested, to be honest, and then to play a great final after playing a not very good one at the Olympics where I went on to lose, what, nine games in a row (against Andy Murray)?

"But I came here and never dropped my serve. That's the kind of reaction I want to see from myself. I didn't have a letdown."

The 31-year-old is now taking serious aim at a sixth US Open title.

"It's important for me to push forward and give myself the best possible preparation for New York," he said.

"I'll take anything as long as I'm getting through my early rounds. It's a completely different atmosphere in New York, the pressure is going to be different."