India progressed to the Fed Cup play-offs for the first time ever thanks to a 2-1 win over Indonesia. 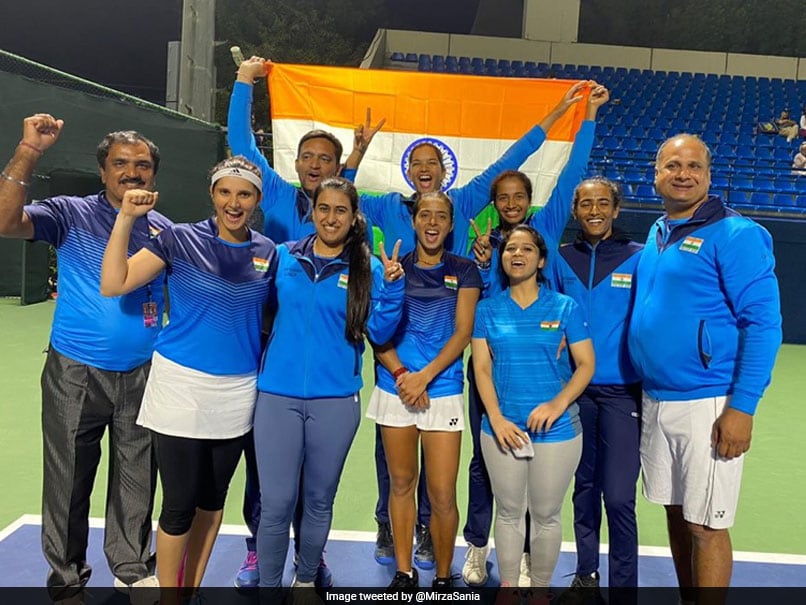 Fed Cup: India advanced to the playoffs after a 2-1 win over Indonesia.© Twitter

The Indian Fed cup team created history by progressing to the play-offs for the first time ever with Ankita Raina leading the side to a 2-1 win over Indonesia in Dubai. Ankita Raina on Saturday night pulled off a crucial singles win against talented Aldila Sutjiadi to lock the tie 1-1 after Rutuja Bhosale suffered a crushing defeat to an unranked Priska Madelyn Nugroho. Up against the 16-year-old Indonesian, who is ranked 15th on the ITF junior circuit, Rutuja lost 3-6, 6-0, 3-6 in one hour and 43 minutes in the opening singles. Ankita, who lost her previous two singles, demolished the challenge of Sutjiadi 6-3, 6-3 in the second rubber.

She then combined with the seasoned Sania Mirza to beat Sutziyadi and Nugroho 7-6(4), 6-0 to seal India's place in the play-offs where they will take on either Latvia or the Netherlands in April.

They overcame a sluggish start as they were trailing 1-4 but regrouped to dominate. India finished second in the six-team Group with four wins in a row after losing the opening tie to China, who remained unbeaten in the tournament.

Since earning their place back in Asia/Oceania Group I in 2016, India has remained in the regional group.

With the rise of Ankita, things began to improve. Rutuja also played a key role as she provided winning starts in a few ties, sharing the burden with Ankita.

Sania's return to Fed Cup after four years also helped as her inspirational presence and guidance helped the side immensely.

India's non-playing captain Vishal Uppal was delighted with the result.

"It's a historic moment and to be part of it feels surreal. I am proud of each and every member of our team -- the players, physio, coach, manager. We all came together and worked towards a common goal," Uppal told PTI.

"The key was to do the fundamentals well and keep it simple on court. As a team everyone stepped up one day or the other which is very important. I hope this win will give a big boost to women's tennis in India."

Comments
Topics mentioned in this article
Sania Mirza Tennis
Get the latest updates on India vs South Africa and check out  Schedule, Results and Live Score. Like us on Facebook or follow us on Twitter for more sports updates. You can also download the NDTV Cricket app for Android or iOS.