Former No. 1 Dinara Safina ended a six-match losing streak dating to September when she beat Han Xinyun of China 6-2, 6-0 to start the Malaysian Open on Tuesday. 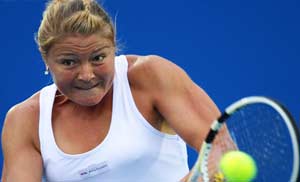 Former No. 1 Dinara Safina ended a six-match losing streak dating to September when she beat Han Xinyun of China 6-2, 6-0 to start the Malaysian Open on Tuesday.

Since her distinguished career was derailed a year ago by a back injury, Safina has struggled to recover. The Russian's ranking has fallen from 2nd to 113th. The win on Tuesday was only her 10th in the last 12 months. Both games Han won were breaks of serve.

Safina moved on to meet Lucie Safarova of the Czech Republic, ranked 35th. All of Safarova's latest losses have been to players in the top 45.

Four of the five seeds in action, including defending champ Alisa Kleybanova of Russia, advanced. The only one who didn't was seventh-seeded Kimiko Date-Krumm, who was overtaken by Anne Kremer of Luxembourg 4-6, 6-2, 7-6 (5).

Other winners included Michaella Krajicek of the Netherlands, Ekaterina Ivanova of Russia, and Japanese pair Kurumi Nara and Misaki Doi.

Comments
Topics mentioned in this article
Badminton Tennis
Get the latest updates on ICC T20 Worldcup 2022 and CWG 2022 check out the Schedule, Live Score and Medals Tally. Like us on Facebook or follow us on Twitter for more sports updates. You can also download the NDTV Cricket app for Android or iOS.