Elina Svitolina had ended the year ranked sixth in the world, but will climb two places when the new rankings are released on Monday. 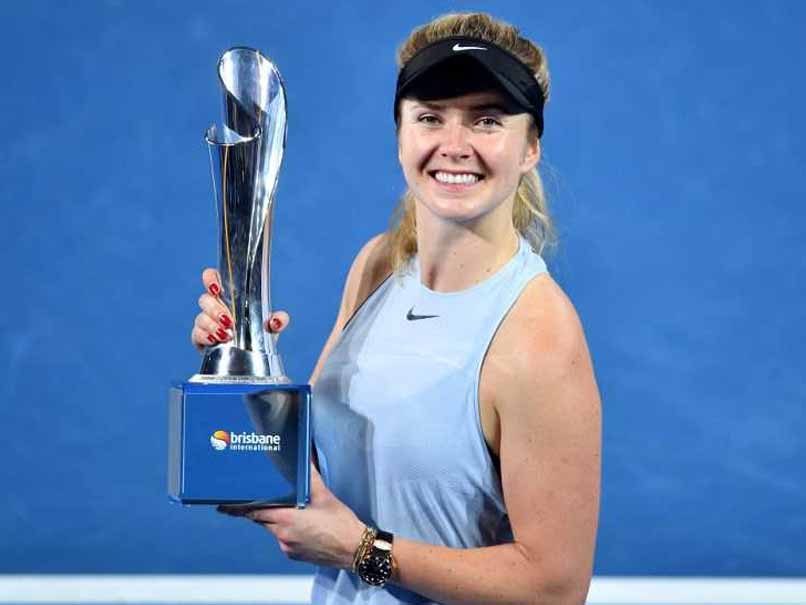 Ukraine's Elina Svitolina laid down her marker as a serious contender for the Australian Open when she demolished Belarusian qualifier Aliaksandra Sasnovich 6-2, 6-1 in the Brisbane International final on Saturday. Svitolina won five titles on the WTA tour last year, more than any other woman. She ended the year ranked sixth in the world, but will climb two places when the new rankings are released on Monday and will go into the year's first Grand Slam as the fourth seed. Svitolina said she had worked hard in the off-season to improve her game and that work was now paying off.

"I've started to play more consistently and there's lots of things that changed," she said.

"I'm stronger physically. I have a different look to my game."

The 23-year-old had a tough path to the decider, having to overcome top-10 players Johanna Konta and Karolina Pliskova and former world number six Carla Suarez Navarro along the way.

"I didn't have any expectations for this week -- I was just trying to take it one match at a time," she said.

"The first match was quite tough against Suarez Navarro. And I had a very tough draw.

"It was very important to use what I was working on during the offseason, and it was working.

"I was playing better and better and my serve worked really good during this week."

Svitolina was far too strong for Sasnovich, who struggled to cope both with the Ukrainian's serve and her relentless barrage of groundstrokes from the back of the court.

Sasnovich was playing in her first final on the WTA tour and her nerves showed in the early stages as Svitolina broke her early and raced away to a 3-1 lead.

The Belarusian steadied the ship but she was always under pressure and serving at 2-5, she cracked.

Svitolina pounced, breaking her again and wrapping up the set in 31 minutes.

Sasnovich was also playing her eighth match in nine days and her movement around the court appeared slightly slower than in her previous outings.

Svitolina was even more dominant in the second set, racing to a 5-0 lead before Sasnovich even got on the board.

However, it was a minor reprieve as Svitolina held serve to love to claim her 10th title in just 65 minutes.

Sasnovich refused to blame her busy schedule for her performance.

"I don't know, to be honest. Sometimes it happens. I played some good matches and this one was bad."

But the Belarusian, who will rise 35 places in the world ranking to 53rd, said her efforts in making the final had made her reevaluate her goals for Melbourne.

"I have time to prepare for Australian Open," she said.

"I hope to be ready mentally, physically, to be good there."

Comments
Topics mentioned in this article
Elina Svitolina Aliaksandra Sasnovich Tennis
Get the latest updates on ICC T20 Worldcup 2022 and CWG 2022 check out the Schedule, Live Score and Medals Tally. Like us on Facebook or follow us on Twitter for more sports updates. You can also download the NDTV Cricket app for Android or iOS.