Playing in her first final at the elite Premier Mandatory level, World No.15 Elena Vesnina battled through a tense three hours and one minute to subdue eighth-ranked Svetlana Kuznetsova. 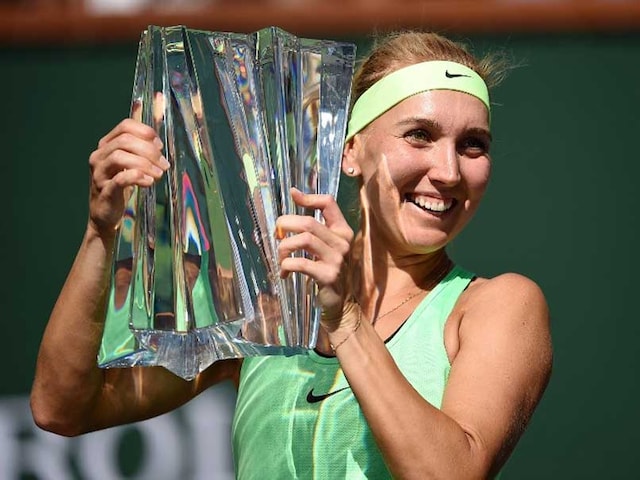 Elena Vesnina brought out her best game on Sunday to defeat fellow Russian and two-time Grand Slam champion Svetlana Kuznetsova in the women's singles final to clinch the Indian Wells crown. Vesnina capped a stellar campaign with a hard-fought 6-7(6), 7-5, 6-4 triumph over Kuznetsova. Playing in her first final at the elite Premier Mandatory level, World No.15 Vesnina battled through a tense three hours and one minute to subdue eighth-ranked Kuznetsova.

The triumph comes a year after Vesnina, 30, fell in the first round of qualifying at Indian Wells and capped a tournament that saw her down both Germany's soon-to-be number one Angelique Kerber and seven-time Grand Slam champion Venus Williams.

For Kuznetsova, it was a third disappointment in as many finals at Indian Wells, this one coming a decade after she fell in back to back finals in 2007 and 2008.

A third set that, like the first two, featured multiple service breaks saw Kuznetsova take a 4-2 lead before Vesnina broke for 4-3 then won a marathon ninth game in which Kuznetsova saved four break points before Vesnina converted her fifth with a stinging service winner to find herself serving for the match.

After knocking a forehand wide on her first match point, she secured the victory when Kuznetsova's service return went long.

"She was up set and 4-1, then 4-2 in the third," Vesnina said. "She had so many break points on my serve. She was 30-Love up couple of times on her serves. And I always keep coming back. I stick there, you know.

"I was just not giving anything at that moment. I didn't think about the end of the match.

"And when I broke her at 4-All and went to serve for the match, I had this in my mind: I'm not going to give it. I went to serve and I was, like, I'm never going to lose this game."

For a time it seemed Kuznetsova's steadier play would win the day, but in the end it was Vesnina's aggression that paid off, even though her 49 unforced errors out-stripped her 46 winners.

How does @EVesnina001 lose her #BNPPO17 midway through her champion's press conference?

"I felt like when I was playing, I didn't feel good today, because she was very aggressive, and I was a little bit out of my game," Kuznetsova said. "I was too far from the court, and I was running all the way, way behind, so the only thing I could do was defend.

"I was too passive," Kuznetsova said. "I think that's why I lost."

The victory continues Vesnina's rise of the last year. She reached the semi-finals at Wimbledon in 2016 and is no stranger to the big stage in doubles, in which she captured Olympic gold in Rio de Janeiro.

In a first set featuring four breaks of serve, Kuznetsova gave Vesnina a set point with a double fault in the 10th game, but Vesnina sent a forehand wide and Kuznetsova escaped to hold serve.

She double-faulted herself on her first set point in the tiebreaker before Vesnina saved another set point with a service winner.

Kuznetsova finally sealed the set with the help of a favourable netcord bounce after an hour and 11 minutes.

"It was such a heartbreaking moment for me," Vesnina said of that netcord, and she looked rattled as Kuznetsova stormed through the first two games of the second set.

But she slowed Kuznetsova's progress with a break for 2-1 before another break and a hold from Kuznetsova put Kuznetsova up 4-1.

After a on-court talk with her father-coach Sergey Vesnin, Vesnina won four straight games to find herself serving for the set. She didn't get a whiff of a set point as Kuznetsova closed out yet another service break with two crisp forehand winners.

.@BNPParibasOpen Champion @EVesnina001 wants to thank ALL of her fans!

She would show you the , but @RogerFederer stole it #BNPPO17 pic.twitter.com/W8vcX7xfIw

But Vesnina responded with a break of her own and wouldn't waste her next chance, firing an ace on her first set point to send it to a third.

While she said her Olympic doubles triumph holds a special place in her heart, Vesnina was thrilled with the biggest singles win of her career.

"Only the Grand Slam is bigger, the only thing that can beat this win," she said.

Comments
Topics mentioned in this article
Elena Vesnina Svetlana Kuznetsova Tennis
Get the latest Cricket news, check out the India cricket schedule, Cricket live score . Like us on Facebook or follow us on Twitter for more sports updates. You can also download the NDTV Cricket app for Android or iOS.