Martina Hingis, 33, was playing with Italy's Flavia Pennetta but despite a promising start to the women's doubles final they went down 2-6, 6-3, 6-2 to fourth seeds Ekaterina Makarova and Elena Vesnina. 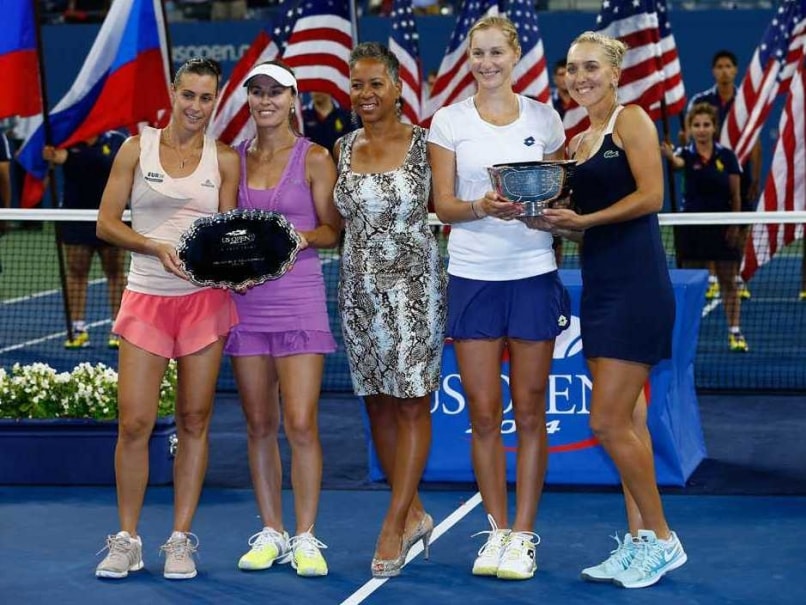 Vice President of the USTA Katrina M. AdamsC poses with Ekaterina Makarova (2R), Elena Vesnina (R) of Russia, Martina Hingis (2L) of Switzerland and Flavia Pennetta (L) of Italy and their trophies after their women's doubles final match on Day Thirteen of the 2014 US Open at the USTA Billie Jean King National Tennis Center on September 6, 2014 in the Flushing neighborhood of the Queens borough of New York City.© AFP
New York:

Martina Hingis's hopes of winning her first Grand Slam doubles title since 2002 were shattered on Saturday when the Russian pairing of Ekaterina Makarova and Elena Vesnina took the US Open title.

Hingis, 33, was playing with Italy's Flavia Pennetta but despite a promising start to the final they went down 2-6, 6-3, 6-2 to the fourth seeds.

Hingis last appeared in a doubles final at a Grand Slam in 2002 at the Australian Open where she won the title with Anna Kournikova, one of nine doubles crowns she captured during her heydey.

She also captured the 1998 doubles title in New York with Jana Novotna.

Makarova and Vesnina have now won two majors after their 2013 triumph at the French Open.

Their victory came a day after Makarova was beaten in the singles semi-finals by two-time defending champion Serena Williams.

Comments
Topics mentioned in this article
Ekaterina Makarova Elena Vesnina Martina Hingis Flavia Pennetta Tennis
Get the latest updates on IPL 2021, IPL Points Table , IPL Schedule 2021 , live score . Like us on Facebook or follow us on Twitter for more sports updates. You can also download the NDTV Cricket app for Android or iOS.