Novak Djokovic declared himself in career-best form after trouncing veteran James Blake 6-2, 6-0 on Sunday in the third round of the Sony Ericsson Open. 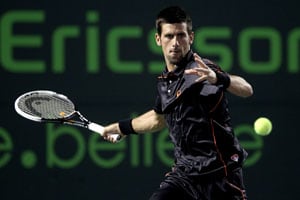 Novak Djokovic declared himself in career-best form after trouncing veteran James Blake 6-2, 6-0 on Sunday in the third round of the Sony Ericsson Open.

The No. 2-seeded Serb extended his winning streak to 22 consecutive matches. He has lost just three games in two matches at this tournament and his 20-0 start to 2011 is the best record to begin a year since Ivan Lendl started 25-0 in 1986.

"It has been a dream run for me the last couple of months," Djokovic said. "I'm playing the best tennis of my life."

Fish is ranked a career-best 15th and is poised to overtake longtime friend Andy Roddick in the next rankings. Roddick lost his opening match Saturday and is expected to drop from eighth to about 15th, the lowest he has been ranked since 2002.

"I certainly wouldn't feel like the top-ranked American, considering what Andy has accomplished and what I've accomplished," Fish said. "His career has quadrupled mine, at least."

Roddick is a five-time Grand Slam finalist who won the 2003 U.S. Open and finished that year ranked No. 1. Fish's record in major events is mediocre and he has made the top 20 in the year-end rankings only twice.

But at 29, Fish is in the best condition of his career. That showed against Gasquet in the hot midday sun.

"Playing out there today, you can see why you need to be fit to win these matches," Fish said.

Fish's next opponent will be Juan Martin del Potro, who is gaining momentum in his comeback from wrist surgery last May. The big Argentine earned his first win this year over a top-10 player by beating No. 4 Robin Soderling 6-3, 6-2.

Del Potro, ranked 484th in February, will climb back into the top 45 after the tournament.

Fish lost to Gasquet twice in 2008, including in the first round at Wimbledon, but the American has won their past two meetings - a reflection of his improved conditioning, he said. After undergoing knee surgery in September 2009, he changed his diet and lost more than 14 kilograms.

A slimmer Fish went 40-14 in 2010, a career high for victories, and finished the year ranked 16th, another career best. Willing to play longer points now that he's fitter, his shot selection is less risky, so he makes fewer unforced errors.

"I used to have to go for shots that I don't have to do anymore," he said.

Instead, it was Gasquet who made the big mistake - a double-fault on break point in the next-to-last game. Fish served out the victory at love to reach the round of 16, which matches his best showing in 10 appearances at Key Biscayne.

Fish has a 2-2 record against del Potro.

"In the fourth round, every player is playing really well," del Potro said. "So it will be a nice match for both of us."

Comments
Topics mentioned in this article
Tennis Milos Raonic Melanie Oudin James Blake Novak Djokovic Rafael Nadal Somdev Devvarman
Get the latest updates on ICC T20 Worldcup 2022 and CWG 2022 check out the Schedule, Live Score and Medals Tally. Like us on Facebook or follow us on Twitter for more sports updates. You can also download the NDTV Cricket app for Android or iOS.