Djokovic reaches the quarterfinals of the Dubai Championships

Australian Open champion Novak Djokovic reached the quarterfinals of the Dubai Championships on Wednesday, overcoming the net play of Feliciano Lopez of Spain 6-3, 2-6, 6-4. 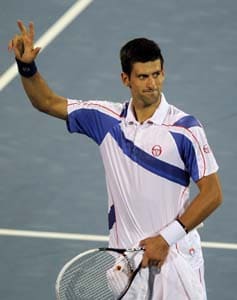 Australian Open champion Novak Djokovic reached the quarterfinals of the Dubai Championships on Wednesday, overcoming the net play of Feliciano Lopez of Spain 6-3, 2-6, 6-4.

Berdych, Djokovic and Roger Federer are the only seeded players left in the tournament. Eighth-seeded Ernests Gulbis of Latvia was upset by Sergiy Stakhovsky of Ukraine, 6-3, 5-7, 6-1. Richard Gasquet of France overcame a 5-2 deficit in the second set to beat Ukrainian qualifier Sergei Bubka 6-2, 7-5.

The second-seeded Djokovic dominated his Spanish opponent in the first set, but 18 unforced errors in the second set allowed Lopez to get back into the match. The third set had several long rallies from both players. They mixed up their shots with strong baseline play and some stunning volleys that had the crowd cheering.

Djokovic allowed an early advantage to slip before breaking again for a 4-3 lead. He went up 5-3 with the help of an ace and several other serves that were clocked at 125 miles per hour and closed it out when Lopez netted a backhand.

Djokovic will play German Florian Mayer in the quarterfinals.

"It's been an exciting match, to be honest, even though I was struggling," Djokovic said.

In the third set, Djokovic said he felt the difference was his return.

"He was getting a lot of balls back and he was making me, you know, play an extra shot," he said.

The 41st-ranked Lopez has never beaten Djokovic in three attempts. He blamed the loss partly on an inconsistent first serve in the third set. It dropped to 43 percent and allowed Djokovic to attack the slower second serve.

"This is one of those matches, because you are practicing every day and dreaming since you were young to become professional tennis player, no? Playing Novak, tonight here with the full crowd, it's great match for any of us," Lopez said.

Berdych failed to serve out the match after breaking for a 6-5 lead, but won two straight points from 5-5 in the tiebreaker to finally close out the win.

"It was a quite big test for me," said Berdych, who had a 1-9 record coming into the match against Davydenko. "Especially against Nikolay, it's tough because he likes to play fast. He likes to play long rallies, and he's very solid from the baseline. So it was a very tough match for me."

Gasquet's win means there will be an all-French quarterfinal in Dubai. Gasquet will play Gilles Simon, who beat qualifier Lukas Rosol of the Czech Republic 6-2, 6-3.