After the match, Djokovic made his way to sign autographs for youngsters at the side of the court. But as fans clamoured to get the Serbian star's attention the barrier holding them back fell onto his legs. 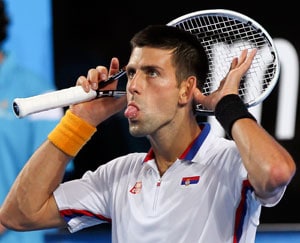 World number one Novak Djokovic escaped serious injury in an incident with over zealous fans after helping Serbia beat Italy at the mixed teams Hopman Cup in Perth on Monday.

Djokovic, who only arrived in the city on Sunday evening after winning an exhibition tournament in Abu Dhabi, was too good for Italian Andreas Seppi, defeating him 6-3, 6-4.

After the match, Djokovic made his way to sign autographs for youngsters at the side of the court. But as fans clamoured to get the Serbian star's attention the barrier holding them back fell onto his legs.

Djokovic spent a few moments on his haunches before gingerly walking off the court and cancelling his post-match press conference to get treatment.

However the 25-year-old showed no signs of discomfort when he returned to the court for mixed doubles a short time later and played down the incident.

"I am good," he said. "It was a bit of a shock and I am glad that the children involved are okay. I am fine."

Djokovic, aiming for a third straight Australian Open title in Melbourne next month, made it 10 wins from as many matches against Seppi, in their first meeting since the Serb came from two sets down to win at this year's French Open.

Monday's win secured the tie for Serbia with his team-mate Ana Ivanovic, the top seeds for the eight-nation event and playing the event together for the third time.

Ivanovic gave the Serbians the lead with a commanding straight sets win over fellow French Open winner Francesca Schiavone in the women's singles.

Having been in Australia for more than a week, Ivanovic showed she was in good shape for next year's first Grand Slam by overpowering Schiavone.

Ivanovic went into the match with wins over the Italian in their only four previous meetings, and continued that dominance.

Schiavone held break points in the first game, but Ivanovic steadied and then won the first seven games of the match.

Her only hiccup came when she was broken while serving for the match at 5-3, but she immediately broke back to secure the win.

Ivanovic, ranked 13th in the world after a solid 2012, said she was trying to play more aggressively as she seeks to recapture the form that took her to number one in the world earlier in her career.

"I felt like I played well," the 2008 French Open champion said.

"I feel I have a lot more on the ball and I am playing the way I used to play before, setting up the points and using my forehand.

"The things I worked on during the off-season are paying off."

Comments
Topics mentioned in this article
Tennis Andreas Seppi Novak Djokovic
Get the latest Cricket news, check out the India cricket schedule, Cricket live score . Like us on Facebook or follow us on Twitter for more sports updates. You can also download the NDTV Cricket app for Android or iOS.