The Swiss said he had taken time off since the US Open to recharge his batteries, and was now focused on a strong finish to the season and on planning for 2014. 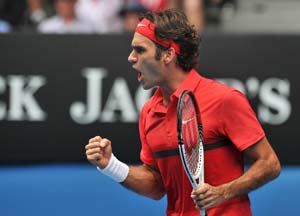 Roger Federer said on Monday he is convinced he can still compete at the pinnacle of the men's game as he plots to end a rough year on a high by reaching the World Tour Finals.

The Swiss great, who has slipped to seventh in the world rankings after failing to reach a Grand Slam final in 2013, said his aim at the start of the year was to qualify for the end-of-season showpiece in London and nothing had changed.

The 32-year-old, who has won just one tournament this year and made early exits at Wimbledon and the US Open, is also seventh in the race to reach next month's Tour Finals, featuring the season's best eight players.

"I have no idea right now what the situation is," said Federer, who has won the event a record six times. "I'm really just focused on my own game, my first-round opponent. That's all I really need to do."

"It was the goal at the beginning of the season to qualify for it. I consider it the absolute best of the best tournament out there, so I want to be part of that," he added.

"So it's extra motivation for me to play well and be part of that great tournament."

Federer, along with the rest of the top eight seeds at this week's Shanghai Masters, has a bye into the second round but faces a daunting potential quarter-final against top seed and defending champion Novak Djokovic.

The Swiss said he had taken time off since the US Open to recharge his batteries, and was now focused on a strong finish to the season and on planning for 2014.

Despite a growing debate about when the 17-time Grand Slam champion should retire, Federer, considered by many to be the greatest player of all time, said he refused to dwell on recent disappointments.

"I think my game's been coming back, which has been very important," he said. "Now it's about staying positive and working hard every single day. That's been the mindset."

And he sees no reason why he cannot continue to compete with the likes of Rafael Nadal, Djokovic and Andy Murray, all significantly younger.

"My mindset now is, OK, next year is going to be a great year again where I'm not going to have that many points to defend, especially at some very key moments where I consider myself a favourite," he said.

"For that reason I'm really looking forward to 2014 already."

"My expectations will always remain very high. That will never change," he added.

Federer also had warm words for long-time nemesis Nadal, who on Monday returned to the top of the world rankings after battling back from a long injury lay-off.

"I think (it's) an unbelievable comeback. No doubt about it. I mean, one year ago people were saying he might never play tennis again. One year later he's world number one. That's how quick things can go in tennis, which is great."

Comments
Topics mentioned in this article
Tennis Samantha Stosur Gael Monfils Novak Djokovic Bernard Tomic Rafael Nadal Andy Murray Roger Federer Stanislas Wawrinka David Ferrer
Get the latest updates on ICC T20 Worldcup 2022 and CWG 2022 check out the Schedule, Live Score and Medals Tally. Like us on Facebook or follow us on Twitter for more sports updates. You can also download the NDTV Cricket app for Android or iOS.