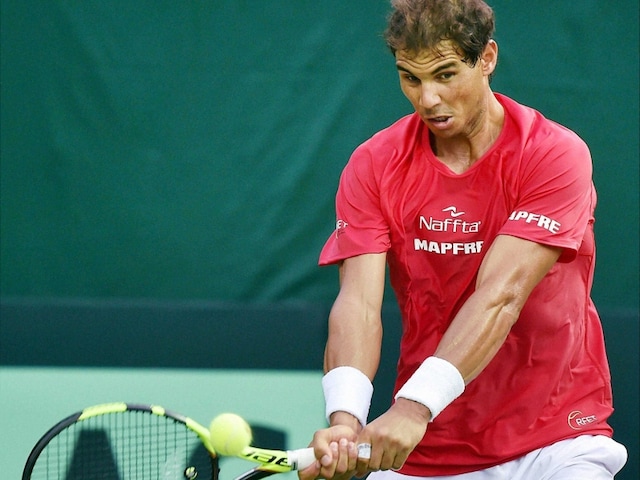 Spain's Rafael Nadal trains in New Delhi ahead of the Davis Cup tie against India.© PTI

Led by world number four Rafael Nadal, the Spaniards landed here in the morning and hit the courts in the evening.

After watching Nadal and David Ferrer indulge in an intense session lasting one hour and 30 minutes, it was not difficult to conclude that the Indian players have fire to deal with.

They hit the ball clean, flat and with such ferocity that it never looked like a practice. Saketh Myneni (ranked 137) and Ramkumar Ramanathan (ranked 203) are set be exposed to some high quality tennis.

Asked if he liked the evening timing for the tie, the 14-time Grand Slam champion, covered in sweat-soaked T-shirt, said it was "very necessary".

Nadal's take further vindicates Indian captain Anand Amritraj's complaint that they have sacrificed the home advantage by setting the evening time for the matches.

"The court is good, it's very humid. First day, we had a long trip. To be in India again is nice. I have been here a lot of times in last couple of years. I feel good here, good people, good crowd."

When asked what made Spain bring players like him for a tie like this where the rivals do not have top players to handle, Nadal said winning the World Group place back was a "motivation".

"I am representing my country and that's always special motivation. There's always confrontation when you are not playing at home, so difficult. India have a good team, it will be tough. They will be playing at home in front of home crowd in conditions they chose.

"We have lots of good players in top-100, it's tough for us not to be in world group, so we are looking forward to coming back to the world group, and that's the chance to win here, it's not going to be easy. We need to be ready and play our best," he said.

Spain are out of world group since January 2014 when they lost 1-4 to Germany in the first round. They have been striving in the European\Africa zone since then.

Nadal expressed satisfaction with the speed of the courts at the DLTA.

"It's not very slow and not very, very fast. Good court to play good tennis," he said after the session that was supervised by their captain Conchita Martinez, the 1994 Wimbledon champion and winner of 33 WTA singles titles.

In the 20-member contingent, Spain have one doctor, two physios, one sparring partner to hit with the playing members.

Each playing member has come with his personal trainer. Fernando Fernandez-Ladreda Aguirre, the President of the Spanish Tennis Federation, is also accompanying them.

Comments
Topics mentioned in this article
Leander Paes Rohan Bopanna Saketh Myneni Rafael Nadal David Ferrer Tennis
Get the latest updates on IPL 2020, check out the IPL Schedule for 2020 and Indian Premier League (IPL) Cricket live score . Like us on Facebook or follow us on Twitter for more sports updates. You can also download the NDTV Cricket app for Android or iOS.