Novak Djokovic and 39-year-old Nenad Zimonjic lost their doubles rubber to Kazakhstan's Andrey Golubev and Aleksandr Nedovyesov in Belgrade in the first round tie. 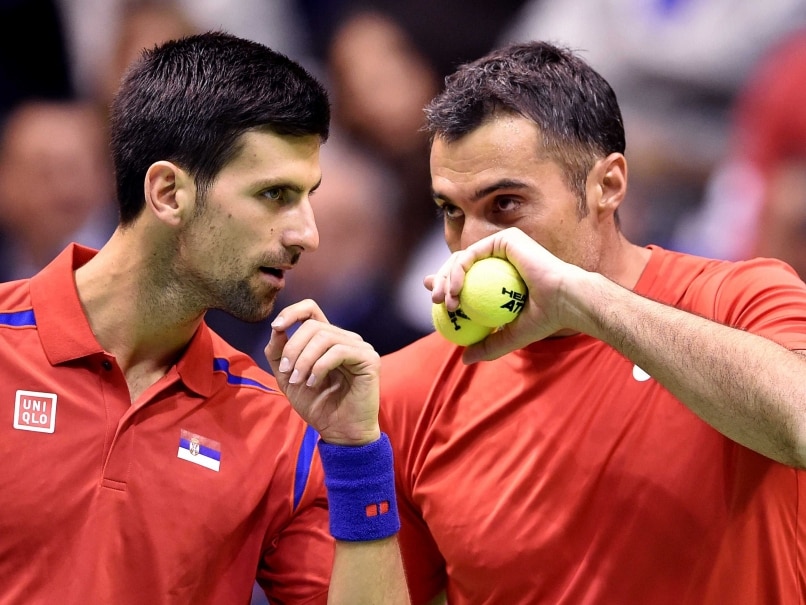 World number one Djokovic and 39-year-old Nenad Zimonjic lost their doubles rubber to Kazakhstan's Andrey Golubev and Aleksandr Nedovyesov in Belgrade in the first round tie.

The 6-3, 7-6 (7/3), 7-5 scoreline gave Kazakhstan a 2-1 lead ahead of the reverse singles on Sunday where the winner will go on to face either Britain or Japan in July's quarter-finals.

On Sunday, Djokovic will play Mikhail Kukushkin when he will try to keep the tie alive for the 2010 champions. The final singles is due to feature Viktor Troicki against Nedovyesov.

"Kazakhstan's quality was extraordinary today. They were better in crucial moments," admitted Djokovic.

"But we know what we have to do, we know how to prepare for the thrid day. We have reason to believe in both victories since we are the favourites -- both Viktor and me."

In Birmingham, the Murray brothers edged Britain closer to the quarter-finals with a 6-3, 6-2, 6-4 win over Japan's Yoshihito Nishioka and Yakutaka Uchiyama.

Just as in their title triumph over Belgium in November in what was Britain's first Davis Cup success in 79 years, the brothers played a starring role.

It was a fifth win in five Davis Cup outings for the Murrays who didn't face a break point on Saturday.

The win gave the hosts a 2-1 lead and world number two Andy Murray can seal the tie on Sunday when he faces Japan's top player Kei Nishikori, ranked number six, in the first reverse singles.

Dan Evans is scheduled to face Nishioka in what may be the decider.

Nishikori is the highest-ranked player Murray has ever played in Davis Cup, but he has won five of their previous six matches.

"I played well against him last year. I played him a couple of times. He's ranked six in the world, so he's one of the best," said Murray.

"It's obviously going to be extremely tough, but I'm playing well and hopefully I can play a good one tomorrow and try and seal the win."

Bryans give US edge

Bob and Mike Bryan gave the United States a crucial 2-1 edge with a thrilling five-set win over the Lleyton Hewitt-inspired Australians in Melbourne.

The 16-time Grand Slam and Olympics doubles champions looked to be cruising to victory, breezing through the opening two sets before Hewitt and John Peers forced a fifth set.

Jim Courier's Americans can wrap up the tie on Kooyong's grass courts with just one more victory on Sunday through their top-rated John Isner -- who faces Bernard Tomic -- or Jack Sock who could end up playing Hewitt.

The winner of that tie will face either 2005 champions Croatia or Belgium in the quarter-finals.

Italy became the first team to reach the quarter-finals when Simone Bolelli and Andreas Seppi defeated Marco Chiudinelli and Henri Laaksonen 6-3, 6-1, 6-3 for a 3-0 win over Switzerland.

Italy, whose only Davis Cup title came 40 years ago, will face either Argentina, three-times runners-up since 2006, or Poland.

Switzerland, the champions in 2014, were without Roger Federer, who is injured, and Stan Wawrinka, who opted not to play in the tie in Pesaro.

World Group rookies Poland fought back in Gdansk by winning the doubles against Argentina after dropping both of Friday's singles.

In Hanover, Tomas Berdych claimed a 50th Davis Cup win when he and veteran Radek Stepanek claimed a 7-6 (9/7), 7-5, 6-4 win over Germany's Philipp Kohlschreiber and Philipp Petzschner.

If they win through on Sunday they will face France, who beat Canada 3-0 in Guadeloupe, in the quarter-finals.

Comments
Topics mentioned in this article
Novak Djokovic Andy Murray Jamie Murray Tennis
Get the latest updates on India vs England Series, India vs England , live score and IPL 2021 Auction . Like us on Facebook or follow us on Twitter for more sports updates. You can also download the NDTV Cricket app for Android or iOS.