Leander Paes rolled back the years, linking up with Rohan Bopanna to defeat Mate Pavic and Franko Skugor but Marin Cilic then ruthlessly crushed Sumit Nagal. 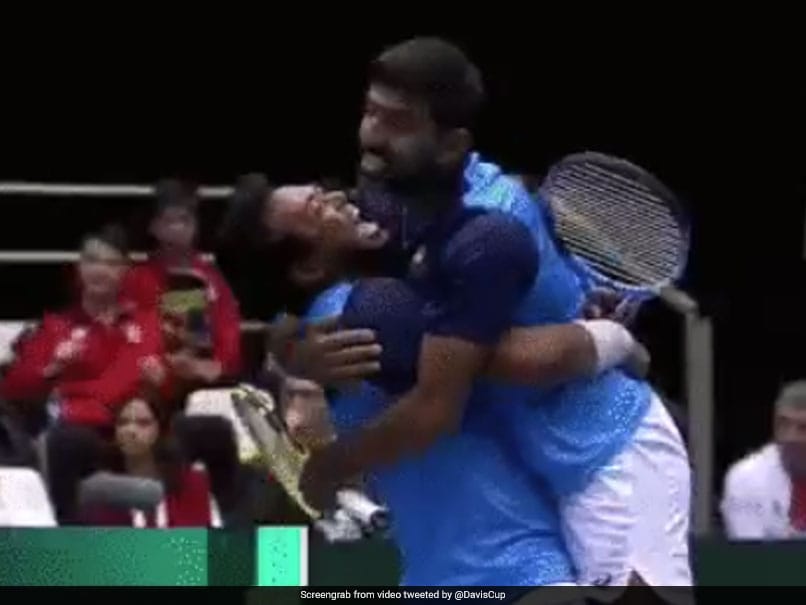 India's Leander Paes went down fighting as his dream of crowning his 30-year Davis Cup career with a place at the finals ended Saturday while Ecuador and Italy reached the November showpiece, triumphing in empty arenas locked down because of the coronavirus crisis. Leander Paes, 46, has played for India in every Davis Cup season bar one since his debut in 1990 but went to the qualifier tie in Zagreb against two-time champions Croatia having already announced that 2020 would be his last year on tour.

With India trailing 2-0 overnight, Paes rolled back the years, linking up with 40-year-old Rohan Bopanna to defeat Mate Pavic and Franko Skugor 6-3, 6-7 (9/11), 7-5 to keep their country's faint hopes of making the finals alive.

However, former US Open champion Marin Cilic then ruthlessly crushed that ambition with a quickfire 6-0, 6-1 demolition of Sumit Nagal.

The world No.37 books Croatia's place at the #DavisCupMadridFinals with a dominant 6-0 6-1 victory against Sumit Nagal!

See you in Madrid, Croatia!pic.twitter.com/SDc6QOEo7W

"This was going to be my last match but the captain (Rohit Rajpal) said something to me after the match," Paes told daviscup.com, hinting that he could still play in the September play-offs.

"I will leave it to the captain because whoever plays, the best thing needs to be done and the best decision needs to be made."

It was a sweet Davis Cup farewell for US doubles duo Bob and Mike Bryan in Hawaii.

The twin brothers, playing what they said would be their last Davis Cup tie, defeated Sanjar Fayziev and Denis Istomin 6-3, 6-4 in just 67 minutes to give the United States an unassailable 3-0 lead over Uzbekistan.

Reilly Opelka had beaten Istomin 6-2, 7-5 and Taylor Fritz beat Fayziev 6-1, 6-2 on Friday to put 32-time winners United States on the road to victory.

US captain Mardy Fish, aiming to rekindle US fortunes in a competition they last won 13 years ago, asked the 41-year-old Bryans to return for the first time since they played in a US quarter-final loss to Croatia in 2016.

The Bryans agreed, but said they won't be on hand when the 12 qualifiers join champions Spain, Canada, Britain, Russia, France and Serbia in November's finals in Madrid.

Although they plan to hang up their racquets for good after the US Open in September, Bob Bryan said they were pleased to have a chance to end a Davis Cup career that began in 2003 on a high note.

"We've played some of the most important matches of our lives (in Davis Cup)," he told daviscup.com. "These are the matches we'll remember. Today was a great way to end this part of our career."

Ecuador swept past Japan in Miki in a tie played behind closed doors due to fears over the spread of the coronavirus.

The hosts were without injury-hit Kei Nishikori and Yoshihito Nishioka, who decided not to join his team to avoid a possible virus quarantine on his return to the United States.

Gonzalo Escobar and Diego Hidalgo outplayed Ben McLachlan and Yasutaka Uchiyama 7-6 (7/3), 6-3 to give Ecuador, without a singles player in the world top 150, a shock victory.

"The situation with no fans helped us," Hidalgo told daviscup.com. "I think that evened up the tie."

Uchiyama said it was hard to concentrate while playing in a nearly empty arena, "but I don't want to use it as an excuse".

A limited number of journalists and backroom staff were permitted to enter the arena once they had their body temperature checked.

Italy shrugged off the absence of fans in Cagliari to defeat South Korea with Fabio Fognini and Simone Bolelli easily beating Nam Ji-sung and Song Min-kyu 6-3, 6-1 in the doubles to seal their place in the Madrid finals.

"Fabio was very calm, very collected. We joked that maybe he should play behind closed doors all the time," said Palmieri.

All sports in Italy are being played behind closed doors as the country tries to stem the spread of COVID-19 which has caused 233 fatalities with more than 5,000 infected.

Colombia made the most of Bogota's high altitude to defeat 2016 champions Argentina for the first time.

Level at 1-1 overnight, world number one doubles pair Juan Sebastian Cabal and Robert Farah edged Maximo Gonzalez and Horacio Zeballos 6-3, 6-7 (3/7), 7-5 with Daniel Elahi Galan securing a place in the final thanks to a 6-3, 6-4 win against Juan Ignacio Londero.

Elsewhere, Kazakhstan defeated the Netherlands when Alexander Bublik saw off Robin Haase 7-6 (7/4), 6-1 while Germany sealed a 4-1 win over Belarus with Jan-Lennard Struff winning his second rubber of the weekend, seeing off Egor Gerasimov 6-3, 6-2.

Comments
Topics mentioned in this article
Leander Paes Marin Cilic Sumit Nagal Rohan Bopanna Tennis
Get the latest updates on IPL 2021, check out the IPL 2021 Schedule and Indian Premier League Live Score . Like us on Facebook or follow us on Twitter for more sports updates. You can also download the NDTV Cricket app for Android or iOS.