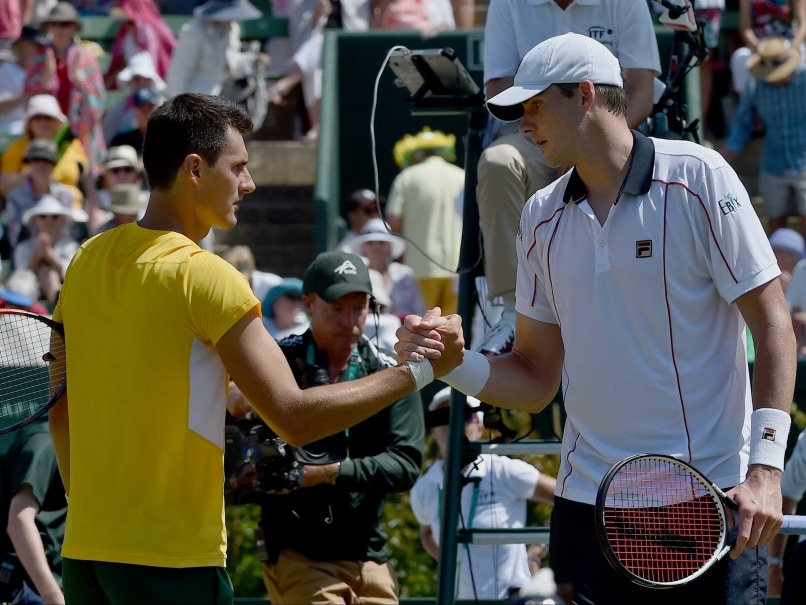 John Isner cranked up a fastest serve of 253 kilometres per hour (157 miles per hour), which is claimed to be the fastest serve ever above challenger level.© AFP
Melbourne:

John Isner powered the United States to victory over Australia in the Davis Cup World Group tie with a masterful serving performance at Kooyong on Sunday. (Click here for latest Tennis stories)

It puts the Americans into the quarter-finals of the men's team competition with a home tie against either Belgium or Croatia and leaves Australia in a play-off to hold on to their World Group status for next year.

The United States are the most successful nation in Davis Cup, having been crowned champions 32 times.

It is the first time since 1979 that the United States have beaten Australia on grass and their first win in the traditional rivalry on any surface since 1997.

Australia had not lost in Davis Cup at Kooyong, the former home of the Australian Open, since the 1946 Challenge Round when Jack Kramer, Ted Schroeder led the USA to a 5-0 sweep.

It completed a big weekend for Isner, who cruised to a straight-sets win over Sam Groth in Friday's opening singles before trumping Tomic on the Australians' choice of a grass surface.

It was a dominant serving performance by the 2.08-metre tall (6ft 10in) Isner and set the tone from the first point.

Tomic appeared passive and distracted early in the match and was overheard during a changeover questioning teammate Nick Kyrgios's absence from the tie after pulling out citing an illness.

Tomic was also heard to say "that's twice he's done it", in possible reference to Kyrgios's withdrawal from the tie against the Czech Republic last year.

Isner began confidently, only dropping four points on his service in the first two sets, before Tomic rallied to take the third set 7-5 to fire up the home crowd.

But the American held his nerve to clinch the match after trailing 1-3 in a tiebreaker, before claiming the fourth set with two powerful serves after Tomic had overhit a forehand.

It took world number 11 Isner's record in Davis Cup competition to 11-9 and 2-0 over the 20th-ranked Tomic.

Comments
Topics mentioned in this article
John Isner Bernard Tomic Tennis
Get the latest updates on IPL 2021, IPL Points Table , IPL Schedule 2021 , live score . Like us on Facebook or follow us on Twitter for more sports updates. You can also download the NDTV Cricket app for Android or iOS.