Davis Cup: India Have a Mountain to Climb Despite Tomas Berdych's Absence 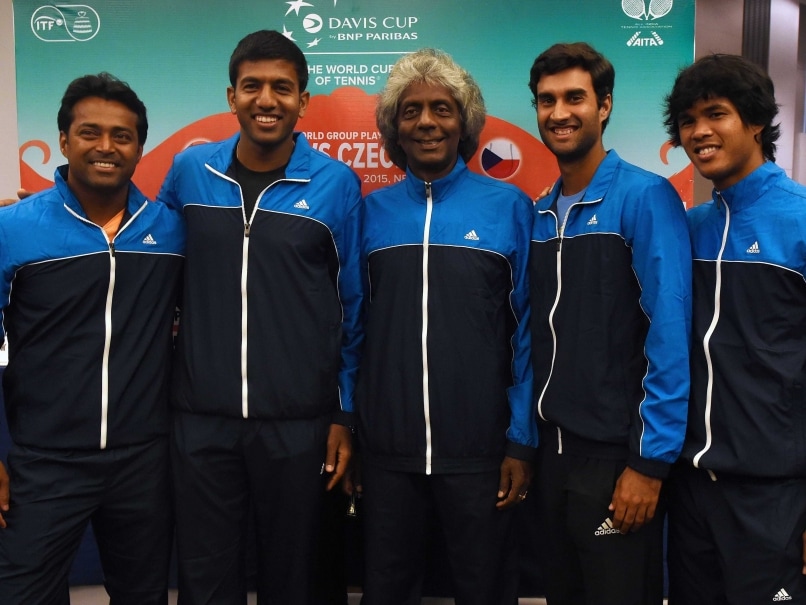 India will challenge Davis Cup powerhouse and top seeds Czech Republic for a place in the elite World Group, hoping that their players will capitalise on home conditions and absence of world number six Tomas Berdych in the Play-off tie, beginning on Thursday. (Paes Wants Young Indian Talents to Come up And Replace Him)

The fact that Berdych is missing from the rival line-up has prevented it from becoming a one-sided contest but the patchy form of Somdev Devvarman is still a cause of concern for the hosts.

The results in the last few months for one of the most hard-working Indian players are far from encouraging. There were 11 instances when Somdev failed to clear the first round and four times he did not go beyond second round in the main draw matches, including the Challengers.

Lack of hard work has never been a problem for Somdev but his defensive style of play, which he has stubbornly refused to change, is perhaps the bane of his game. (Somdev Wary of Pressure While Playing in India)

That puts Yuki Bhambri, who is in decent touch and has acquired the status of country's numero uno singles player, under a lot of pressure.

Yuki had emerged India's hero in the tie against New Zealand where he won both his matches, including the deciding fifth rubber. Here too, a lot would depend on how the 23-year-old handles pressure of playing against superior players. (Bopanna Believes India Can Get Back Into Davis Cup World Group)

He is in red-hot form and is coming into the tie after winning the Shanghai Challenger title, which has seen his world ranking rise to 125.

Yuki will open the tie for India by playing against Lukas Rosol before Somdev takes on Jiri Vesley.

"I would prefer playing in cooler conditions but I can play freely at 0-0," Yuki said after the draw. (Anand Amritraj Says Paes, Bopanna Add 'Scare Factor' To Davis Cup Squad)

But Somdev enjoys an unbeaten record on the slow DLTA courts. He has not lost a single match here since 2010, winning a Commonwealth Games gold and two Delhi Open titles.

If he can continue his love-affair with the venue, he will do great service to the nation.

The venue too has been chosen by the players themselves, keeping in mind the slow nature of the conditions that suit the Indians. The ball comes slow and bounces on the centre court, which would mean that points won't finish fast. This is exactly what Somdev loves.

But at the same time searing heat may trouble the Indians too and keeping themselves cramps-free would be crucial. The temperature is likely to be around 35-36 and the fitness of the players of both the sides will be tested.

According to non-playing captain Anand Amritraj the draw has come out exactly as they wanted.

India must win at least one of the two singles on Day one and hope that seasoned Leander Paes recreates his magic in company of Rohan Bopanna to give India a one-point cushion, going into the final day.

Since Berdych is not there India would surely look to achieve what it could not do against Serbia.

Jiri Vesley is tie's highest-ranked player at number 40 but he has won only one match and that too a doubles rubber in his Davis Cup career so far. His two other singles wins have come in dead rubbers -- against France and Japan.

Somdev says he does not count it as inexperience as the Czech left-hander has been grinding it hard everyday on the ATP tour.

Vesley had made a fabulous start to the season, winning the Heineken Open as a Qualifier and later ended a finalist in Nastase Tiriac Trophy. He has consistently played in ATP 500s and Masters series event and most of his defeats have come against only the top players. Handling challenge of players such as Somdev and Yuki should not a big issue for him.

"I think I have the game good enough to win the point for my country," he has already warned the hosts.

Lukas Rosol has not had much success this year on the Tour but he has consistently played in big events -- ATP 500s and 1000s -- playing against quality opponents.

His terrific win over Rafael Nadal in 2012 Wimbledon was his ticket to fame but he has not been able to repeat that kind of performance again. But both the singles players of the visiting side have huge games and big ground strokes and the Indians will have to play out of their skins to match them.

"I am comfortable playing first. That suits me," he said after the draw.

Radek Stepanek is class apart and his presence is similar to Leander's in the Indian team. With vast experience behind him, he's expected to guide the team.

But home conditions doubled with vociferous crowd support can spur on the Indians to come up with something special.

Comments
Topics mentioned in this article
Tomas Berdych Leander Paes Yuki Bhambri Somdev Devvarman Radek Stepanek Tennis
Get the latest updates on India vs England Series, India vs England , live score and IPL 2021 Auction . Like us on Facebook or follow us on Twitter for more sports updates. You can also download the NDTV Cricket app for Android or iOS.