Serbia and Canada are level at 1-1 as Janko Tipsarevic failed to follow up Novak Djokovic's opening rout of Vasek Pospisil. 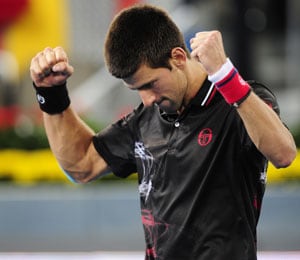 Canada ended the first day of their Davis Cup semi-final with Serbia level on 1-1 as Janko Tipsarevic failed to follow up Novak Djokovic's opening win.

In the first rubber, it took only 100 minutes for world number one Djokovic to compellingly and confidently rout 41st-ranked Canadian Vasek Pospisil, giving Serbia an early lead.

Djokovic, who arrived in Belgrade on Wednesday after losing to Spain's Rafael Nadal in the third of four consecutive bids to win the US Open final, only allowed Pospisil a total of six games, racking up a series of 13 in a row and easily winning 6-2, 6-0, 6-4.

"Playing for my country additionally inspires me and gives me an extra strength. I played extremely good and I am very happy to have brought a lead to Serbia," Djokovic told reporters after the match.

Pospisil admitted he had no chance against Djokovic "playing the way he was playing".

"I'm not going to put up any excuses. He's the No. 1 in the world for a reason and I thought he played amazing," Pospisil said.

This was Tipsarevic's ninth singles five-setter while playing for Serbia in the Davis Cup.

Tipsarevic twice took a lead in the four-hour match, but Raonic tied both times and in the exciting fifth set the two were levelled until 4-4.

Having won his fifth game, Tipsarevic managed to gain a match point on Raonic's serve, but failed to capitalise and eventually lost the match in which Raonic served 35 aces in total, 11 of which came in the fifth set alone.

"It's great to come back from 2-1 down. I was serving really well and that kept me alive," Raonic said.

Serbia's coach Bogdan Obradovic said, however: "Tipsarevic has nothing to regret".

In the doubles on Saturday, Nenad Zimonjic and Ilija Bozoljac face Pospisil and his team-mate Daniel Nestor.

Zimonjic and Nestor are former doubles partners, who won Wimbledon twice (2008 and 2009) and the 2010 French Open.

The tie is being played on an indoor clay court before a sell-out crowd of 15,000 at Belgrade Arena. The winner will advance to November's final against either Argentina or the Czech Republic.

Serbia, eyeing Davis Cup glory after victory in 2010 against France, are without Viktor Troicki, who is serving an 18-month doping ban handed down by the International Tennis Federation (ITF).