Ferrer, 31, who won his only Masters title last year in the French capital, dominated his fellow Spaniard 6-3, 7-5 to set up the championship decider against Djokovic who came back to win 4-6, 6-3, 6-2 against the 2011 Paris champion. 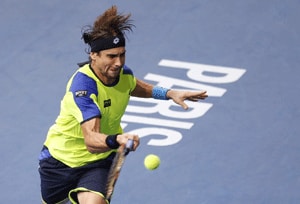 Defending champion David Ferrer upset compatriot and world number one Rafael Nadal on Saturday to reach the Paris Masters final where he will meet Novak Djokovic who eliminated Roger Federer.

Ferrer, 31, who won his only Masters title last year in the French capital, dominated his fellow Spaniard 6-3, 7-5 to set up the championship decider against Djokovic who came back to win 4-6, 6-3, 6-2 against the 2011 Paris champion.

Nadal was bidding to become the first player since Andre Agassi in 1999 to win both the French Open and Paris Masters in the same season but again came up short at a tournament where he last played in 2009.

Nadal hit an uncharacteristic 25 unforced errors and converted just one break point in seven attempts as Ferrer defeated his rival for only the fifth time in 21 meetings.

The world number four received plenty of support from the Paris crowd and carved out the decisive break to go 6-5 in the second set before serving out for the match.

"It was definitely the best match I've played all week and I was fighting for every ball but I'm really pleased because I played my best tennis," said Ferrer.

"Now, I'm going to try and recover and play a strong match tomorrow (Sunday) but I love it here and I have great memories," added the man who defeated Poland's Jerzy Janowicz in last year's final.

Djokovic extended his winning streak to 16 matches as he came back from a set down to defeat Federer and keep his hopes of reclaiming the number one spot from Nadal firmly on track.

The six-time Grand Slam winner, who last suffered defeat in the US Open final against Nadal, overcame an inspired Federer before finally taking victory 4-6, 6-3, 6-2 in just over two hours.

The 26-year-old Belgrade native had to reach the final in the French capital to have a chance of snatching back top spot from Nadal at next week's World Tour Finals in London.

"Every time we play it's a great match, challenging and intense," said Djokovic.

"He was better than me in the first set and it wasn't easy. I just had to stay confident and focussed and wait for my chances. I was serving well and just kept patient and in the end it paid off."

Federer, whose only title this season was on grass at Halle, admitted he was beaten by the better man.

"I think it was a tough match in quick conditions. I think I started well, and I was able to keep it up for some time," said the 17-time Grand Slam winner.

"I had my chances, second and third set. Disappointed right now, but overall it was a good week for me."

Federer took the first set in dramatic fashion when he saved four break points at 5-4 up before converting his second set point when the Serb overhit a backhand that flew out the back of the court.

After Federer saved four break points in their first meeting since the World Tour Finals last year in London, he sealed the opening set 6-4 in 46 minutes.

Djokovic was broken again to open the second set when Federer found the line with a passing shot but then he importantly hit back to take the Swiss star's serve for the first time in the match to level at 1-1.

Djokovic was gaining in momentum and got the break he needed to win the second set when Federer planted a routine volley into the net to go 2-4 down.

The 2009 Paris champion then held comfortably in his next two service games to close out the set 6-3 and level the match.

An expected tight final set developed into a one-sided affair as Djokovic grew in strength and broke twice to take the match as he moved closer to a sixth title of the season.