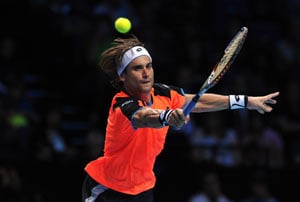 The World No.5, who is enjoying his best-ever season with seven titles, had to dig deep to break his opponent's resistance for a 6-3, 3-6, 6-4 win late Tuesday.

"It was a really tough match, it was very close and we had very good rallies," the 30-year-old Spaniard was quoted by the ATP website as saying. "I'm very happy with my game. Maybe this year, I am playing more aggressive with my shots."

Next up for Ferrer is Roger Federer, who beat Ferrer in the semi-finals last year, while the Argentinian faces Janko Tipsarevic. (Read: Federer walks to a World Tour Finals record)

"I will try to play better than today," Del Potro said. "It is going to be difficult match because Janko is a dangerous player. He moves so fast and he plays very, very solid on the baseline."