Lucie Safarova and Petra Kvitova breezed past their Serbian rivals to give holders Czech Republic a 2-0 lead in the Fed Cup final here on Saturday. 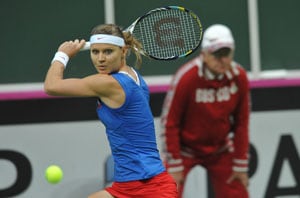 Lucie Safarova and Petra Kvitova breezed past their Serbian rivals to give holders Czech Republic a 2-0 lead in the Fed Cup final here on Saturday.

And Kvitova, ranked eighth, then cruised past 22-ranked Jelena Jankovic 6-4, 6-1 in just an hour and 20 minutes to make it 2-0 for the hosts after day one.

On the hardcourt of Prague's O2 Arena, the Czechs now need to win only one of Sunday's three rubbers to lift the trophy for a second straight year.

Serbian number one Ivanovic was broken twice in both sets, letting Safarova improve her head-to-head winning streak to four victories.

"We both started very nervous, luckily I was the first one who improved and got the first set, which was very important," Safarova said.

"Then I even upgraded my game, I was pushing her, going through her backhand ...(and) using the leftie rotation to her backhand, which was very effective," she added.

Despite the score, she said, "it was a very close second set, she had many break points on my serve and I think the key was that I held those break points and kept my focus."

Pushed by a frantic home crowd of more than 13,500 fans, "I had goosebumps throughout the match, the atmosphere was unbelievable," she added.

Ivanovic did not conceal her disappointment.

"At the beginning of the match I wasn't really letting go on my shots and they were ending quite short," said the Serb.

"This let her be aggressive and this was I think the key to today's match. 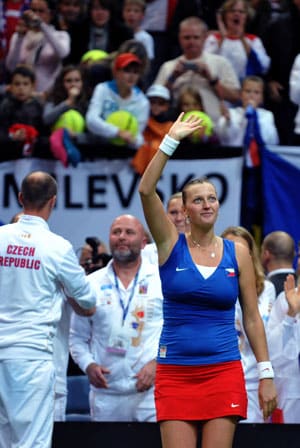 "I'm very disappointed I didn't manage to get the first point for our team," added Ivanovic, who slammed her racket against the ground in frustration several times.

"I thought I had plenty of opportunities and I just wasn't executing when it was important."

"It was very frustrating, I felt like I could turn the match around, but I just wasn't winning the most important points."

In the second rubber, Kvitova had to cope with the effects of a cold that had forced her to pull out of the WTA Championship last week.

"I didn't know what I could expect from myself on the court from the beginning," she said.

"And at the end, I really wanted the match to be over," added Kvitova, who dominated the game, relying on a first serve that Jankovic could not resist.

"Actually I'm surprised (at) how I played," said Kvitova.

Jankovic said she had little chance against her rival who "was really on a roll."

"I had chances in the first set, I was up 4-2, but she came back with some unbelievable shots. There was nothing I could do at times," said Jankovic.

"You have to try to break her and to do something but I was very late and wasn't setting up well for my shots," she added.

On Sunday, Kvitova will first face Ivanovic, before Safarova plays Jankovic in the final singles tie.

The Czech Republic's Andrea Hlavackova and Lucie Hradecka are then due to face Serbia's Bojana Jovanovski and Aleksandra Krunic in the closing doubles rubber.

"We just need the final point tomorrow, and of course I'll want to finish it and win this beautiful trophy we've had at home for the whole year," said Kvitova.

The Czech Republic are defending the trophy after they beat Russia in Moscow 3-2 in 2011.

Former Czechoslovakia, which split peacefully into the Czech Republic and Slovakia in 1993, lifted the Fed Cup five times between 1975 and 1988.

Comments
Topics mentioned in this article
Vera Zvonareva Anastasia Pavlyuchenkova Petra Kvitova Maria Kirilenko Tennis Czech Republic
Get the latest Cricket news, check out the India cricket schedule, Cricket live score . Like us on Facebook or follow us on Twitter for more sports updates. You can also download the NDTV Cricket app for Android or iOS.