Maria Sharapova has played strong tennis to reach the Australian Open semis but now faces Serena Williams - an opponent defined by her ruthless brand of tennis. 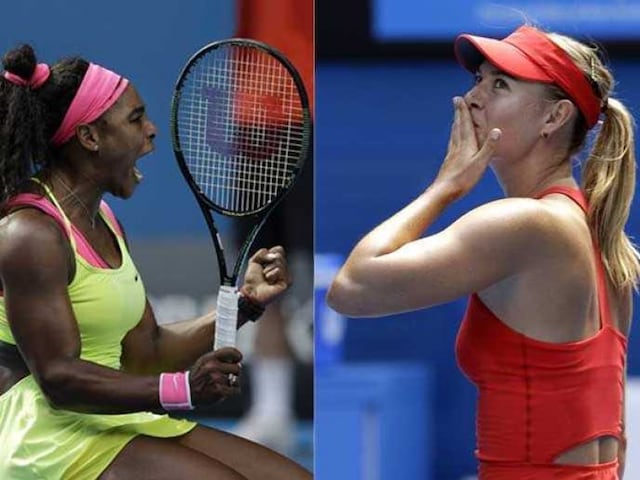 Second seed Maria Sharapova insisted on Thursday that her "terrible" record against arch-rival Serena Williams was irrelevant after booking an Australian Open final showdown with the American top seed.

Sharapova, 27, looked every inch a five-time Grand Slam champion as she demolished fellow Russian Ekaterina Makarova 6-3, 6-2 to make the ninth major final of her career.

But she will be facing an opponent in the decider who owns 18 Grand Slams and has a daunting 16-2 record over Sharapova, whose last victory against the world number one came in 2004. (Also read: Serena Williams is ready and raring to fire)

The reigning French Open champion said she would concentrate on her form during this year's tournament, eliminating four seeds including rising star Eugenie Bouchard on her way to the final, rather than past losses to Williams.

"I think my confidence should be pretty high going into a final of a Grand Slam no matter who I'm facing and whether I've had a terrible record, to say the least, against someone," she said.

"It doesn't matter. I got there for a reason. I belong in that spot. I will do everything I can to get the title."

Quizzed on why her record against Williams was so poor, given her strength against other players on tour, Sharapova said she probably over-reacted to the American great's power and aggression.

"I think that's always made me a little bit too aggressive, maybe going for a little bit more than I had to," she said.

"She's great at making players hit that shot that you don't necessarily have to go for -- maybe going for a little too much, going on the line.

"It's been a really difficult match-up for me, but I'm a competitor... I'll go out and do everything I can to try to change that result around."

She said playing 10th seed Makarova had given her a blueprint for dealing with players who went on the offensive as soon as they came out of the blocks.

"I knew she would come out and play really well," she said. "I was ready for that. It was important to really stand my ground in the first few games, which I did well, even though I was behind, especially the first and second one.

"Those key moments are really important."

Sharapova went into the match with a 5-0 record over Makarova and always looked in control, despite intially struggling with her serve in blustery conditions on Rod Laver Arena.

She was forced to defend two break points as she double faulted twice in an opening game that stretched for 10 minutes, finally holding after winning a 17-shot baseline rally.

It proved decisive, with Sharapova breaking her compatriot with a blistering forehand down the line off a tame serve, going on to hold her compatriot to love in the next game and make it 3-0.

Makarova, appearing in only her second Grand Slam semi compared to 18 for her opponent, yelled at her coaching box during the changeover.

A change of tactics to attack the net more brought some relief with a break back, but Sharapova immediately regained the advantage in the next game and served out the set after 48 minutes.

A stunned Makarova looked close to tears as Sharapova continued to dominate in the second set.

She desperately tried to stave off a break with an wild arcing lob but the relentless Sharapova was waiting at the net to smash it home and go up 3-0.

Makarova salvaged some pride by holding serve twice before Sharapova completed the rout after one hour 27 minutes.

Comments
Topics mentioned in this article
Maria Sharapova Serena Williams Madison Keys Tennis
Get the latest Cricket news, check out the India cricket schedule, Cricket live score . Like us on Facebook or follow us on Twitter for more sports updates. You can also download the NDTV Cricket app for Android or iOS.