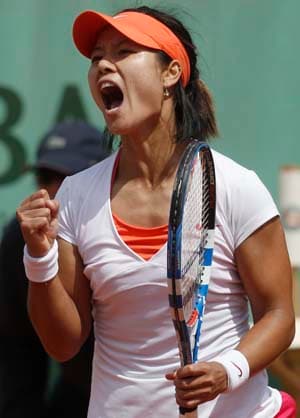 Chinese superstar Li Na battled her way to yet another victory on Thursday, downing Romania's Monica Niculescu after three action-filled sets in the women's singles quarter-final of the Shenzhen Open.

The 26-year-old Romanian fought back with a 6-4 win in the second set, before Li toppled her with a third-set, 6-4 victory.

Li, 31, is the defending Shenzhen Open champion and is also the world number three player.

Her success has sparked a new Chinese interest in tennis as well as a swell of national pride. China's state broadcaster CCTV this week named her rise its number two sports story of 2013.

American Vania King bested Barbora Zahlavova Strycova of the Czech Republic 6-2 6-4, while eight-seed Annika Beck of Germany came back from an initial 3-6 loss to triumph over Austria's Patricia Mayr-Achleitner in the final two sets, 6-3 6-1.

In the semi-final doubles, Niculescu and Klara Zakopalova of the Czech Republic had their second straight victory of the week, taking down China's Wang Yafan and Zheng Jie 6-3 6-4.

Comments
Topics mentioned in this article
Tennis Na Li
Get the latest Cricket news, check out the India cricket schedule, Cricket live score . Like us on Facebook or follow us on Twitter for more sports updates. You can also download the NDTV Cricket app for Android or iOS.