Chennai Open: Saketh Myneni to Face Mikhail Youzhny in Round 1 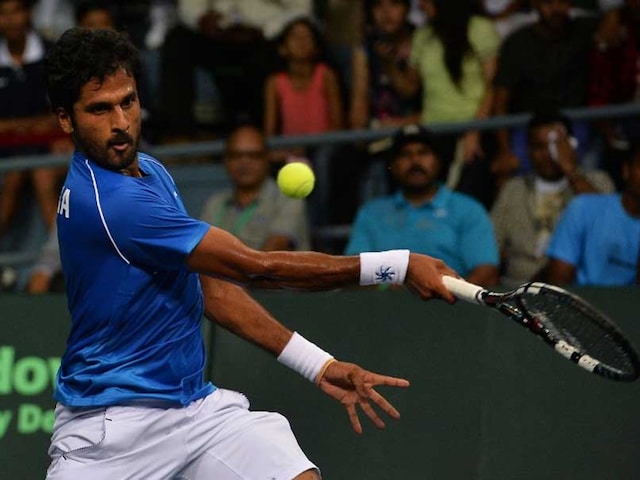 India's top ranked men's singles player Saketh Myneni was handed a difficult draw in the ATP Chennai Open on Saturday, when he was pitted against experienced seventh seed Mikhail Youzhny in the first round of the tournament.

After a fairly good 2016, when he qualified for the US Open, Myneni will now face a herculean task in his first match of 2017 against the world number 57 Youzhny.

On the other hand, Ramkumar Ramanathan has an easier first round clash, after being drawn against an yet-to-be-decided qualifier. If he makes it to the next round, Ramanathan will either face Benoit Paire (world number 47) or Aljaz Bedene (world number 101).

Last year, Ramkumar made the quarterfinals beating Spaniard Daniel Gimeno Traver and then earned a walk over from second seeded South African Kevin Anderson who withdrew due to a knee injury and then beat Russian Alexander Kudryavatsev 3-6, 6-4, 6-4.

"I had a good off season for 10 days before coming here. Each match at this level would be tough but I will put in my best efforts before my local fans who would be rooting for me like last year," Ramkumar said.

Myneni looked unfazed when drawn to play Youzhny but conceded he has to be on top of his game to drive past the highly consistent Youzhny.

"Yes, it is going to be a big challenge for me. He has been a top player for so many years. I have to bring out my best if I want to make a good start to 2016. I am looking forward to it," he said.

The defending Asian Games mixed doubles gold medallist and men’s doubles silver measliest is brimming with confidence after a highly successful year. "I was out for two months following a surgery. I had a good off-season and I am ready for 2017."

In the doubles, India's top pair of Rohan Bopanna and Jeevan Nedunchezhiyan will take on Marcelo Demoliner of Brazil and Croatia’s Nikola Mektic.

The other pair of Purav Raja and Divij Sharan, however, will run into countryman Leander Paes and his Brazilian partner Andre Sa.

Agut said it would be tough to get into the groove in first tournament after the off-season.

"It's always tough, after not having practised for one or two months. But I've been to this tournament on number of times in the past and played my best tennis here," he said.

Comments
Topics mentioned in this article
Tennis Saketh Myneni Ramkumar Ramanathan Mikhail Youzhny
Get the latest Cricket news, check out the India cricket schedule, Cricket live score . Like us on Facebook or follow us on Twitter for more sports updates. You can also download the NDTV Cricket app for Android or iOS.