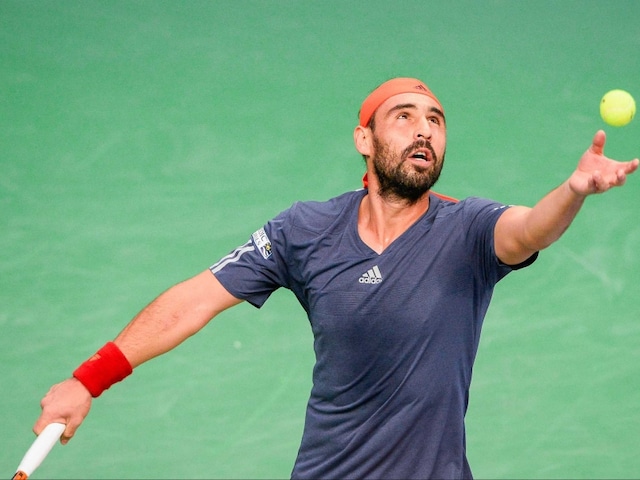 In a format where the winner is decided on the basis of the total number of points obtained in the five-set game, Punjab earned 22 points against 21 by Hyderabad.

The five sets were Legends Singles, Women's Singles, Mixed Doubles, Men's Doubles and Men's Singles. It was a riveting final which went down the wires with both sides putting up a competitive show in all the five sets.

The first set of the game, Legends Singles, between Hyderabad's Thomas Johansson and Greg Rusedski of Punjab, was a close contest with both the seasoned players coming up with a tough fight.

A tie-breaker was thrown up with the players equalling the score at four and the Punjab player managed to clinch the game 5-4.

The next set was the eagerly-awaited contest of the day, the Women's Singles between Swiss veteran Martina Hingis (Hyderabad) and Punjab's Elina Svitolina. The Swiss Miss, now aged 35, not only matched her rival who is in her 20s, but maintained an upper hand often.

It was a close match leading to a tie-breaker and Hingis, who has been a favourite with the tennis fans in Hyderabad, was cheered by them to surge ahead.

The determined Svitolina, who has had a career best ranking of 15 in singles, however, won the set 5-4 in the end.

Hyderabad had an easy win in the next set of Mixed Doubles between Ivo Karlovic and Martina Hings (Hyderabad) and Marcos Baghdatis and Elina Svitolina (Punjab).

The seasoned Hingis and her doubles partner Karlovic, who is almost 7-ft tall, proved too big for their rivals to tame. The Hyderabad pair won the set 5-2.

The next set of Men's Doubles witnessed a keen contest between Ivo Karlovic-Jeevan Nedunchezhiyan (Hyderabad) and Marcos Baghdatis and Saketh Myneni (Punjab).

The set was a long-drawn affair with both sides putting up a stiff resistance and leaving nothing to chance. The two upcoming Indian players were impressive as they fought it out to take an advantage.

A tie-breaker came the way and as the excited spectators looked on, the Punjab side managed to wrest the set 5-4 from the hosts.

The competition became even more closer with both sides sharing the score at 17. Consequently, the outcome of the match depended on the last set of Men's Singles between Ivo Karlovic of Hyderabad and Punjab's Marcos Baghdatis.

The Men's Singles set too ended up in a tie-break with both sides equalling the score at four and Baghdatis had the last laugh as he rounded off the game 5-4. The Punjab side made use of the Super Point and managed to edge out their rival.

Comments
Topics mentioned in this article
Marcos Baghdatis Martina Hingis Tennis
Get the latest Cricket news, check out the India cricket schedule, Cricket live score . Like us on Facebook or follow us on Twitter for more sports updates. You can also download the NDTV Cricket app for Android or iOS.