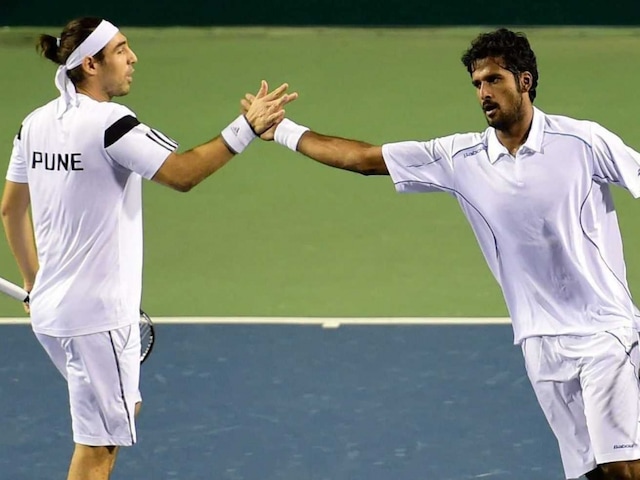 Pune Marathas made a remarkable recovery from 0-2 down to win their next three matches as their contest against Bangalore Raptors ended in a thrilling tie to run away with a bonus point in the Champions Tennis League here on Thursday.

Both played their hearts out and hardly showed any signs of fatigue as they played three -- the mixed doubles, men's doubles and men's singles -- of the five sets of the fixture.

It was the Cypriot Baghdatis who prevailed over Spaniard Lopez in a nerve-wracking encounter which saw each of them refusing to yield any inch. While the Spaniard produced some exquisite flat returns, Baghdatis regaled the the motley spectators with his fine overhead placements.

All eyes were on the men's singles as Bangalore enjoyed a wafer-thin 19-18 lead, but Baghdatis spoiled the rhythm of Lopez with some exquisite forehand cross court winners to break the Spaniard in the fifth game and take the score to 21-21.

Both the players kept their serves with the scoreline reading 5-5 and Baghdatis eventually won the tie-breaker 5-3.

Bagdatis and India's Saketh Myneni then defeated Lopez and Ramkumar Ramanathan of India 6-4 in men's doubles.

The American had herself to blame as she could not break the young Polish player.

Comments
Topics mentioned in this article
Marcos Baghdatis Saketh Myneni Agnieszka Radwanska Venus Williams Feliciano Lopez Tennis
Get the latest Cricket news, check out the India cricket schedule, Cricket live score . Like us on Facebook or follow us on Twitter for more sports updates. You can also download the NDTV Cricket app for Android or iOS.