Anna Chakvetadze, whose career has been derailed by a series of worrying health problems, believes she can rediscover the form that once took her to number five in the world and the semi-finals of the US Open. 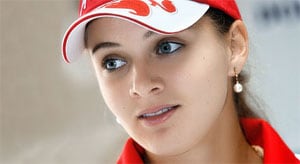 Anna Chakvetadze, whose career has been derailed by a series of worrying health problems, believes she can rediscover the form that once took her to number five in the world and the semi-finals of the US Open.

The Russian was sidelined for most of 2011 after suffering an inner ear inflammation in Dubai, where she was forced to retire from her second-round clash with world number one Caroline Wozniacki.

"When I got sick in Dubai I was in very good shape," Chakvetadze said. "I had found my game again and was really ready to compete. But then I got sick."

The 24-year-old played just three more matches in the year, retiring from two and withdrawing from 11 other events.

"Doctors found an inflammation in my ear and connected it with the dizziness. I had to take medication for it," she told wtatennis.com.

"I didn't expect that it would take so long to get over it, but I did it. When I felt ready to play again it was already almost the end of the season, so I just decided to wait until the new season to play again.

"I hope I'll be able to do some good things in the new season. I'm 100 percent healthy now."

Her absence from the tour meant her ranking nose-dived to 232, but she can call upon her ranking protection in eight tournaments in 2012 to avoid having to qualify.

"It's going to be physically tough to start playing tournaments again because I wasn't training at this level for a long time, and right now I can't do three practices a day like I used to, but I feel so motivated to be back," added Chakvetadze.

"I miss playing, I miss hitting the ball, I miss competing. I've found my motivation again and if I didn't think I could do well again, I wouldn't be coming back."

Her first tournament will be the WTA event in Hobart in the run-up to the Australian Open, the first Grand Slam of the season.

Despite her absence from the courts, Chakvetadze was not idle as she threw herself into the volatile atmosphere of Russian politics.

"I was working with the Right Cause Party. I met some new people and really enjoyed myself. It was great to try myself in a different world."

Comments
Topics mentioned in this article
Tennis Anna Chakvetadze Caroline Wozniacki
Get the latest updates on ICC T20 Worldcup 2022 and CWG 2022 check out the Schedule, Live Score and Medals Tally. Like us on Facebook or follow us on Twitter for more sports updates. You can also download the NDTV Cricket app for Android or iOS.