Caroline Wozniacki to Face Shuai Peng in US Open Semifinals

Caroline Wozniacki, a former world number one who was the 2009 runner-up at Flushing Meadows, reached her first Grand Slam semi-final since the 2011 US Open. 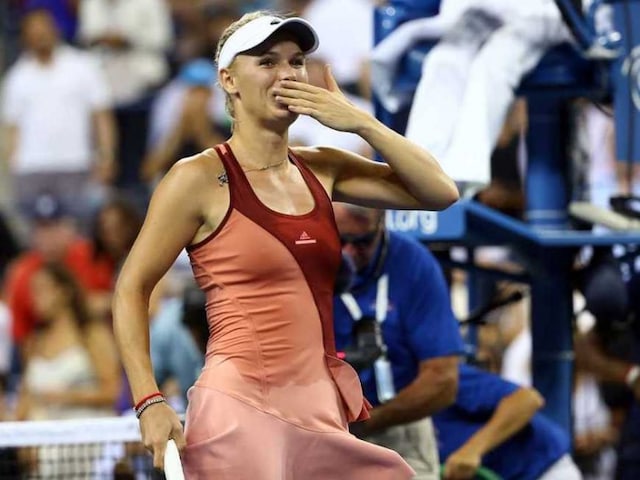 Caroline Wozniacki of Denmark celebrates after defeating Sara Errani of Italy in their women's singles quarterfinal match on Day Nine of the 2014 US Open at the USTA Billie Jean King National Tennis Center on September 2, 2014 in the Flushing neighborhood of the Queens borough of New York City.© AFP
New York:

Former world number one Caroline Wozniacki and first-time Grand Slam semi-finalist Peng Shuai will meet for a place in the US Open title match after dominant victories on Tuesday.

Wozniacki, the runner-up at Flushing Meadows in 2009, dismissed 13th-seeded Italian Sara Errani 6-0, 6-1 and is back in the semi-finals of a major for the first time since the 2011 US Open.

China's Peng, in the quarter-finals of a major for the first time in her 37th attempt, made similarly short work of Swiss teen Belinda Bencic 6-2, 6-1.

Peng joined two-time Grand Slam champion Li Na and Zheng Jie as the only Chinese to reach the last four of a Grand Slam.

"Thirty-seven times Grand Slam," Peng said, then had to stop the thought as she struggled to contain her emotions after taking apart Bencic in just 64 minutes.

"It's a little bit too exciting," she said. "I love tennis, I love to play, but it's a long time, the career. It's tough. Sometimes I've thought to give up and stop playing because I don't know if I can make it or not.

"My coach and my parents always told me to fight and not give up -- that today was coming."

Wozniacki was similarly convincing on a windy night on Arthur Ashe Stadium court, where towels from the players' chairs and stray plastic bags had to be corraled.

In a match between two players with an uncanny ability to extend rallies, Wozniacki's 26 outright winners to the 12 of Errani made the difference.

She was unable to capitalize on any of four break points in the opening game of the match and after fighting for that hold Wozniacki was rolling.

"It was really tricky conditions with the wind but I tried to stay aggressive," Wozniacki said, calling the opening game "very important".

"You always go out there and are a little bit nervous. I served really well after that."

Errani did break Wozniacki to open the second set, but with the Italian unable to protect her own serve it was immaterial, and the Dane wrapped things up in 65 minutes.

"It means so much to me," said Wozniacki, who has struggled to find consistency this season and coped with the abrupt and highly publicized end of her engagement to golfer Rory McIlroy.

"It's been a pretty up and down year for me, and to be here in the semi-finals of the US Open again is just incredible."

Wozniacki toppled former champion Maria Sharapova in the fourth round, while Errani's run had included a third-round win over seven-time Grand Slam champion Venus Williams as upsets saw only two of the top 10 seeds reach the last eight.

She is the only woman besides two-time defending champion Serena Williams who has yet to drop a set in a tournament in which Williams and 10th-seeded Wozniacki are the only players remaining from the top 10 seeds.

Peng took control early against Bencic, the youngest US Open quarter-finalist since Martina Hingis won the title at 16 in 1997.

Peng fended off two break points in her opening service game and didn't face another.

She broke Bencic twice in the first set, and seized a 4-0 lead with two breaks of serve in the second.

Although the 28-year-old Peng has never won a singles title, the world 39 had big-match experience to draw on.

She and Taiwanese partner Hsieh Su-Wei won their second Grand Slam doubles title at the French Open this year.

"I think she has a dangerous game with both hands and the ball is really coming different from her racquet," Bencic said. "I had troubles with this today. Also her angles are great."

The second women's semi-final will be set on Wednesday, when Williams takes on 11th-seeded Flavia Pennetta and Victoria Azarenka -- runner up to Williams the past two years -- faces Russian Ekaterina Makarova in quarter-final matches.

Williams suffered an injury scare on Tuesday, having her right foot and ankle heavily strapped during a timeout early in the second a doubles quarter-final defeat with sister Venus.

Comments
Topics mentioned in this article
Caroline Wozniacki Shuai Peng Tennis
Get the latest Cricket news, check out the India cricket schedule, Cricket live score . Like us on Facebook or follow us on Twitter for more sports updates. You can also download the NDTV Cricket app for Android or iOS.