Wozniacki advanced to the second round when Peng Shuai was forced to retire while No. 6-seeded Stephens beat Anna Schmiedlova of Slovakia 6-4, 6-4 and will play German Julia Goerges next. 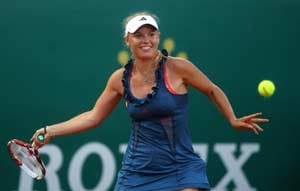 Caroline Wozniacki found another way to win at the New Haven Open, where she has lost just one match in six years.

The four-time champion advanced to the second round Monday when Peng Shuai was forced to retire while up a set.

Peng was leading 6-2, 1-3 when the chair umpire announced the Chinese player could not continue due to illness. Tournament officials later said she was suffering from dizziness. Peng, who has a history of heart problems, spent an extended time with a trainer after Wozniacki asked for a coach while leading 3-0 in the second set.

Peng broke Wozniacki's serve twice in the first set. But fourth-seeded Wozniacki seemed to turn things around in the second game of the second set, which included seven deuces and Peng holding an advantage five times.

"I tried not to think about the score too much, because with her, you never know," she said.

Wozniacki improved to 21-1 in her six years in New Haven. Her only loss here came in last year's semifinals when she retired due to a knee injury.

No. 6-seeded Sloane Stephens beat Anna Schmiedlova of Slovakia 6-4, 6-4 and will play German Julia Goerges in the second round. Goerges advanced with a 6-2, 4-6, 7-5 win over Bojana Jovanovski of Serbia. 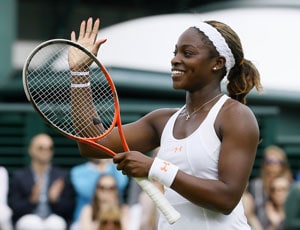 Stephens, who beat Serena Williams to reach the semifinals of the Australian Open in January and made the quarterfinals of Wimbledon in July, came into the match ranked 17th in the world.

Two years ago, she came into New Haven ranked 110th and lost in qualifying.

Stephens said she's been able to stay grounded with the help of some friends, including tennis great Billie Jean King, who sends her texts before every big match.

"She says, 'Pressure is a privilege,'" Stephens said. "I think it's one of the strongest statements I've heard."

Fifth-seeded Roberta Vinci of Italy and No. 8 Dominika Cibulkova both lost. Vinci went out 7-5, 6-3 to Carla Suarez Navarro, who will next play Romanian Simona Halep.

The 21-year-old Halep, who has already won three tournaments this year, beat Daniela Hantuchova of Slovakia, 6-2, 6-1.

Among the other winners Monday were Russians Anastasia Pavlyuchenkova and Elena Vesnina, Mayo Hibi of Japan, qualifier Monica Puig of Puerto Rico and Karin Knapp of Italy.

Defending champion Petra Kvitova was to play Poland's Urzula Radwanska in the last of the day. But Radwanska was forced to withdraw with what was described as a viral illness and was replaced by Annika Beck of Germany.

The match was then postponed a day because of rain, which also delayed the start of the Peng-Wozniacki match by two hours.

Kvitova is using this tournament to help prepare for the humidity in New York next week at the U.S. Open, which she says wreaks havoc with her asthma.

"I never like playing in America, because of my asthma," she said. "But last year I played quite well, I won two titles, so it was a pretty good year, so I know that I can play good here."

Comments
Topics mentioned in this article
Tennis Sloane Stephens Petra Cetkovska Agnieszka Radwanska Caroline Wozniacki
Get the latest Cricket news, check out the India cricket schedule, Cricket live score . Like us on Facebook or follow us on Twitter for more sports updates. You can also download the NDTV Cricket app for Android or iOS.