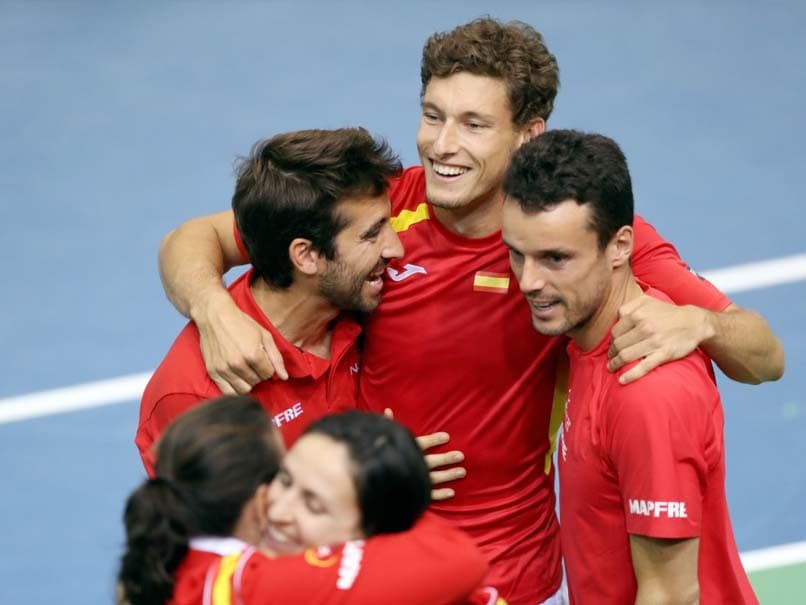 Britain was defaulted into the Davis Cup quarter-finals, while Spain edged Croatia to advance and defending champion Argentina battled Italy into a decisive fifth match at a rain-hit tie.

Canada's Denis Shapovalov hit chair umpire Arnaud Gabas in the face with a ball and was defaulted in the deiciding match, handing Britain's Kyle Edmund a 6-3 6-4 2-1 triumph and giving Britain a 3-2 victory in the first-round tie at Ottawa yesterday.

"It was a strange way to finish," Edmund said. "I've never been part of something like that."

Shapovalov, a 17-year-old Israeli-born Canadian, apologized to Gabas in the referee's office as the umpire was being treated for bruising and swelling of his left eye before being taken to a nearby hospital.

"No one is nicer or carries themselves better for a 17 y/o than Shapovalov," Canadian teammate Vasek Pospisil tweeted. "Everyone can see that today was an accident."

Britain won Saturday's doubles match. Edmund lost to Pospisil in Friday's singles and Shapovalov fell to Evans. "It's a shame that it has happened that way and I feel for the young lad because he's a great talent and he has learned a harsh lesson today," British Davis Cup captain Leon Smith said. "I thought Kyle, from what we saw Friday to the way he came out today, he was absolutely fantastic."

Britain, the 2015 champions playing without top-ranked Andy Murray, advanced to a quarter-final matchup April 7-9 against France with that winner facing either Spain or Serbia in a September semi-final.

Spain to face Serbia next

"I have had some beautiful experiences this weekend and hope for more of the same in the future." Rafael Nadal sat out after reaching the final of last month's Australian Open, but the 14-time Grand Slam champion could well return for an April showdown with former world number one Djokovic.

Serbia swept to a 4-1 victory over Russia in Nis as Dusan Lajovic beat Konstantin Kravchuk 6-3, 4-6, 6-3 in a truncated fourth rubber before the hosts conceded the final match.

Holders Argentina are without Juan Martin del Potro and Federico Delbonis, the men who won the reverse singles to beat Croatia in last year's final.

In Frankfurt, Steve Darcis knocked off German teenager Alexander Zverev in four sets to send Belgium into the quarter-finals and a potential showdown with the reigning champions.

The Belgians, who were playing without world number 11 David Goffin, then completed the job with Rubel Bemelmans brushing aside Mischa Zverev 7-5 6-1.

In ties that were already settled yesterday, the United States, the 32-time champions, finished off Switzerland 5-0 in Birmingham, Alabama, while 28-time champions Australia rounded out a 4-1 win over the Czech Republic and France completed a 4-1 victory over Japan.