Caroline Garcia of France had no answer to a ruthless Maria Sharapova who crushed her 6-3, 6-0 in just a little over an hour. 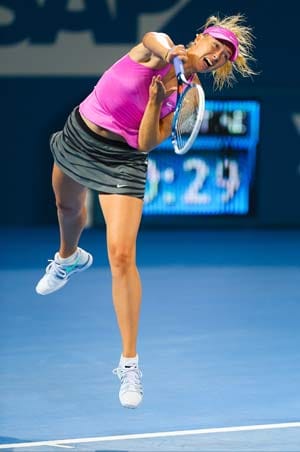 Russia's Maria Sharapova marked her comeback from injury with a straight sets demolition of Frenchwoman Caroline Garcia in the first round of the Brisbane International on Monday.

Sharapova had not played since a shoulder injury forced her off the tour in August, but she made up for lost time when she beat Garcia 6-3, 6-0 in just 64 minutes on Pat Rafter Arena.

"I think I was just really determined to get back on the court -- it's been a while," the third-seeded Russian said.

The world number four handled the Frenchwoman's big serve with ease and totally dominated the rallies, breaking Garcia once in the first set and three times in the second to set up a second round clash against teenage Australian qualifier Ashleigh Barty, a player Sharapova knows little about.

"I think always when you're coming up and making the transition from the juniors to the pros, not many players know about your game," she said.

"I've only seen a few points here and there. I don't think I've watched a full set or match of hers.

"It's very rare to play new opponents because we play so many matches during the year."

Barty, ranked 190th in the world, recorded the best win of her career when she beat Slovakian world number 48 Daniela Hantuchova 6-3, 7-5.

The 17-year-old Barty lives in south-west Brisbane, where she still attends a local high school.

She said she tried not to worry about who was on the other side of the net.

"I try not to think too much about the rankings and just try and play the best I can each match," Barty said.

"I was able to play pretty well tonight, so I'm pretty happy with it."

In other matches, Serbia's former world number one Jelena Jankovic, who enjoyed a strong finish to the 2013 season, won a tricky encounter against Italian Francesca Schiavone 6-2, 7-6 (8/6).

Wildcard Casey Dellacqua made it a good day for the Australians when she came from a set down to beat Galina Voskoboeva of Kazakhstan 3-6, 6-2, 6-3 and move into a second round clash against second seed Victoria Azarenka.

In the men's draw, American Sam Querry caused a minor upset when he beat seventh seeded Russian Dmitry Tursunov 7-5, 6-4, while Australia's Marinko Matosevic enjoyed his first ever ATP win on home soil with a 5-7, 6-4, 7-6 (7/4) win over Frenchman Julien Benneteau.

Comments
Topics mentioned in this article
Tennis Serena Williams Maria Sharapova Kim Clijsters Caroline Wozniacki Mandy Minella Andy Murray Caroline Garcia
Get the latest updates on IPL 2020, check out the IPL Schedule for 2020 and Indian Premier League (IPL) Cricket live score . Like us on Facebook or follow us on Twitter for more sports updates. You can also download the NDTV Cricket app for Android or iOS.