Indian doubles tennis players advanced to the quarterfinals of the Shanghai Masters here on Thursday. 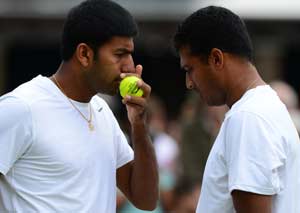 Indian doubles tennis players advanced to the quarterfinals of the Shanghai Masters here on Thursday.

Bhupathi and Bopanna, seeded seventh, defeated American-British unseeded pair of Treat Huey and Jonathan Marray 7-6(9), 6-4 in one hour and 16 minutes.

The Indians, who got a first round bye, next face a tough task against second seeds Max Miryni and Daniel Nestor, who overcame Tomas Berdych-Nenad Zimonjic 6-2, 7-6(5).

Both teams could not earn a break in the first set forcing it into the tie-break. In the tie-break, the seventh seeds got the mini-break at the right juncture with Bopanna serving out the set.

In the second set, Bhupathi-Bopanna earned the much important break on their only break point they got, converting it.

Seeded fourth, Paes and Stepanek also scored a straight sets victory over the American-South African duo of Sam Querry and Kevin Anderson in little over an hour.

Paes-Stepanek won 6-4, 6-4 and will next face Jurgen Melzer and Milos Raonic, who upset eighth seeds Alexander Peya-Bruno Soares 6-3, 6-4 for a place in the last eight.

In both the sets, the fourth seeds earned the break points on the second opportunity they got. Also, three double faults by their opponents at significant points helped Paes-Stepanek to win.