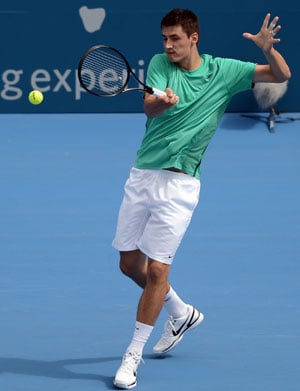 "I'm ready to go for tomorrow's semi-final," Tomic said. "I'm really confident now and I got a shot to get into the final for the first time in my career.

"So the next match is a big match and I'm going to do everything I can to win tomorrow.

"To get the chance to play first Tour event final and to do it in Australia is going to be unbelievable, but I've got to play two quality players to do so."

The 36th-ranked Anderson accounted for the Uzbek 6-4, 6-3 in 84 minutes and will face last year's finalist Julien Benneteau of France in Friday's last four.

The last South African to reach the final four was Wayne Ferreira.

Benneteau, who lost to Nieminen in last year's final, was too strong for American qualifier Ryan Harrison, winning 6-4, 6-2.

Tomic, a 2011 Wimbledon quarter-finalist, now has 17 victories from his past 19 matches in Australia as he heads into the Australian Open Grand Slam in Melbourne on Monday.

"I was happy with myself to stay in there," Tomic said of his win over the experienced 44th-ranked Nieminen. "I was very concerned after that first set."

Tomic grabbed the only service break of the second set when Nieminen faltered trying to stay in the game at 4-5 down.

The Finn petered out in the final set and shanked his second serve on match point.

Anderson, who is 6ft 8in (2.03 metres) tall, is bidding to claim his third ATP title after victories in Delray Beach and Johannesburg.

"It's always good to start the year off on a good note," he said.

"It's still just the second tournament and my sights are set on the Australian Open, but this is a great opportunity for me. I'm really pleased to be in the semi-finals."

Anderson, 26, is coming off a successful week at the mixed-teams Hopman Cup in Perth for South Africa, where he beat Fernando Verdasco and John Isner.

Benneteau discovered on Thursday that he would be the beneficiary of American Isner's injury-enforced withdrawal from the Australian Open. The 35th-ranked Frenchman was elevated to the 32nd and last seeding.

"For sure it's better (to be seeded) but it doesn't mean that you are going to win some matches at the Australian Open," he said.

Comments
Topics mentioned in this article
Tennis Jarkko Nieminen Bernard Tomic
Get the latest Cricket news, check out the India cricket schedule, Cricket live score . Like us on Facebook or follow us on Twitter for more sports updates. You can also download the NDTV Cricket app for Android or iOS.