Top-ranked Victoria Azarenka started off her last tournament before the season-ending WTA Championships by beating Arantxa Rus of the Netherlands 6-0, 6-2 Wednesday in the first round of the Generali Ladies. 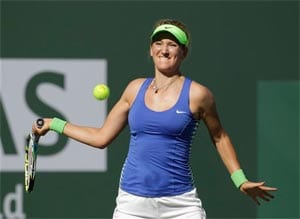 Top-ranked Victoria Azarenka started off her last tournament before the season-ending WTA Championships by beating Arantxa Rus of the Netherlands 6-0, 6-2 Wednesday in the first round of the Generali Ladies.

Coming off her win in Beijing, Azarenka dominated the match from the start as Rus looked overwhelmed. The Dutch player double-faulted eight times and won only two points on her serve in the opening set.

"It was definitely not easy," Azarenka said. "I've done something incredible last week. The court here is different but I did well to adapt."

Azarenka, who conceded one break and saved three more break points in the second set, will next play Simona Halep of Romania.

"Being No. 1 means you're more targeted by the other players," Azarenka said. "I just try to stick to my own game."

Julia Goerges became the first player to advance to the quarterfinals by defeating Romina Oprandi of Switzerland 6-3, 6-3.

The fifth-seeded German saved all four break points she faced against Oprandi, who was a quarterfinalist in Beijing last week.

Goerges will next face either fourth-seeded Lucie Hradecka of the Czech Republic or Sofia Arvidsson of Sweden.

Comments
Topics mentioned in this article
Tennis Arantxa Rus Victoria Azarenka
Get the latest updates on IPL 2020, check out the IPL Schedule for 2020 and Indian Premier League (IPL) Cricket live score . Like us on Facebook or follow us on Twitter for more sports updates. You can also download the NDTV Cricket app for Android or iOS.