Australia's Bernard Tomic bowed out of the Barcelona Open in the second round on Wednesday after losing a marathon battle to Spanish clay specialist Albert Montanes 6-0, 5-7, 7-5. 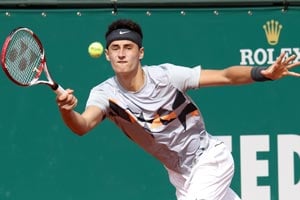 Australia's Bernard Tomic bowed out of the Barcelona Open in the second round on Wednesday after losing a marathon battle to Spanish clay specialist Albert Montanes 6-0, 5-7, 7-5.

Tomic, ranked 15 for the tournament and who at just 19 was the youngest man in the field, put up a tough fight against his 30-year-old opponent, who has won all five of his ATP career trophies on clay.

The teenager, who began the season by progressing to the Australian Open fourth round, spent two hours 15 minutes on centre court at the Real Club de Tenis at an event which Rafael Nadal has won six times in the last seven years.

Stuttgart-born Tomic's showing duplicated his second round last week in Monte Carlo as he began his pre-French Open build-up with a debut appearance in Barcelona.

After losing the first set comprehensively, he began fighting in the second to level at one set each and continued in the third, forcing Montanes to save match points in the 10th game as the desperate Spaniard finally held for five-all.

Montanes then got a break for 6-5 and closed out the match a game later.

Tomic put Montanes under heavy pressure, forcing the veteran to save 13 of the 16 break points he faced, with the Australian losing serve six times.

Comments
Topics mentioned in this article
Tennis Barcelona Bernard Tomic Roger Federer Potito Starace Gael Monfils Albert Montanes Carlos Berlocq Robin Haase
Get the latest updates on IPL 2020, check out the IPL Schedule for 2020 and Indian Premier League (IPL) Cricket live score . Like us on Facebook or follow us on Twitter for more sports updates. You can also download the NDTV Cricket app for Android or iOS.