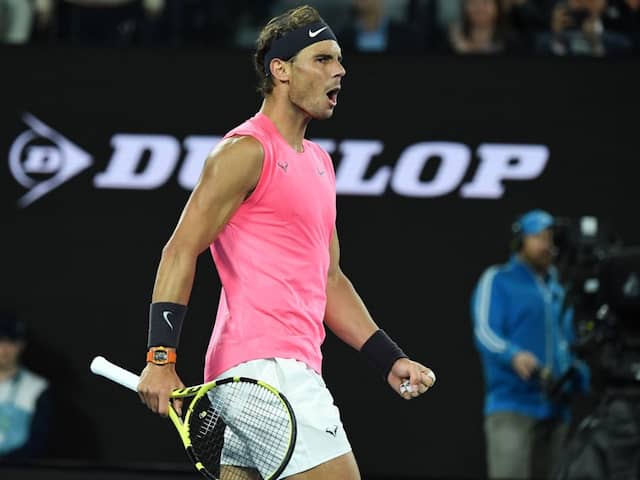 Top seed Rafael Nadal laboured past dogged fellow left-hander Federico Delbonis Thursday to take another step towards only a second Australian Open crown. The Spanish world number one created 20 break point chances but was constantly denied by the Argentine before he wrapped up a 6-3, 7-6 (7/4), 6-1 win on Rod Laver Arena. The victory set up a third round clash with countryman Pablo Carreno Busta, his doubles partner at this month's ATP Cup.

"It was a tough match. I lost a lot of opportunities on break point but found a way to finally win the second set," he said.

"In the third I was more relaxed, more aggressive and found better play in that set."

Nadal had dropped only 10 games in three previous emphatic wins over 76th-ranked Delbonis, and defeat was never on the cards at Melbourne Park.

But the Argentine, whose best Grand Slam result was the third round in Melbourne in 2016, made life hard for the 19-time Grand Slam winner, fending off 16 break point chances.

Nadal looked on track for another straightforward victory after racing through the opening set, sealing it with a trademark crosscourt forehand.

But he found it tougher going in the second, which went with serve up to the tiebreaker.

Nadal, though, came through and Delbonis never recovered as the Spaniard asserted his authority to race home, but not before hitting a ballgirl on the head with a ball.

He rushed over to console her and gave her a kiss for good measure.

"For her it was not a good moment, I was so scared for her, the ball was quick and straight on her," Nadal said. "I'm very happy she is good. She is brave. Well done."

Victory in Melbourne would make Nadal the first man in the Open era -- and only the third in history -- to win all four Major titles twice, after Roy Emerson and Rod Laver.

While he has won 12 titles at Roland Garros, four at the US Open and two at Wimbledon, his only triumph in Australia came in 2009 when he beat Roger Federer, with four runner-up finishes to his name.

If he does win a second title in Melbourne, Nadal will equal the 20 Grand Slams crowns held by great rival Federer.

Comments
Topics mentioned in this article
Rafael Nadal Federico Delbonis Tennis
Get the latest Cricket news, check out the India cricket schedule, Cricket live score . Like us on Facebook or follow us on Twitter for more sports updates. You can also download the NDTV Cricket app for Android or iOS.