Alexander Zverev stormed into his first Grand Slam semi-final, rallying from a set down to shatter the dreams of Stan Wawrinka at Australian Open. 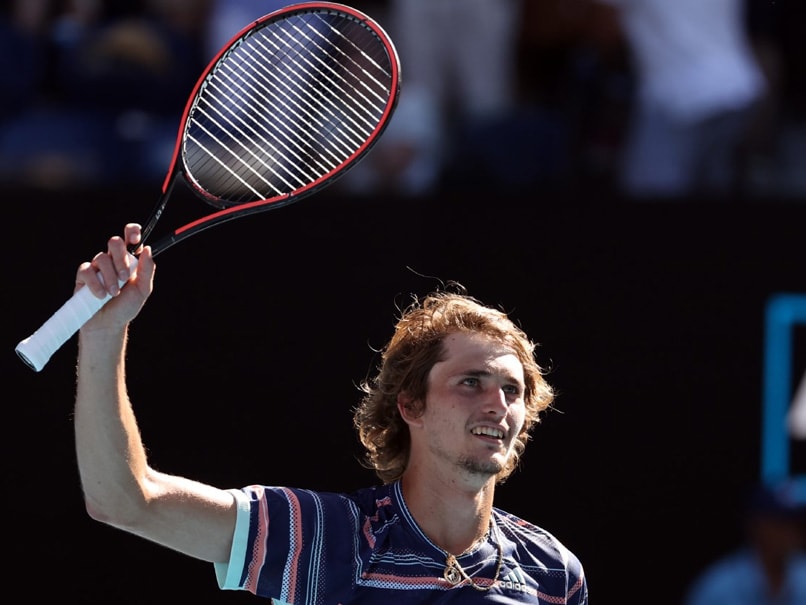 Alexander Zverev will face either Rafael Nadal or Dominic Thiem in the last four.© AFP

German young gun Alexander Zverev stormed into his first Grand Slam semi-final on Wednesday, rallying from a set down to shatter the dreams of veteran Stan Wawrinka at the Australian Open. The seventh seed was thumped in the first set but recovered to grind down the 2014 champion 1-6, 6-3, 6-4, 6-2 in hot sun on Rod Laver Arena. He will face either world number one Rafael Nadal or Austrian fifth seed Dominic Thiem in the last four, with a final beckoning against Novak Djokovic or Roger Federer.

"It feels awesome," said Zverev who has been donating USD 10,000 for each win at Melbourne Park to Australian bushfire relief, and will even hand over the 4.12 million Australian dollars (USD 2.78 million) winner's cheque if he clinches the title.

"I've done well at other tournaments and in other matches but could never break that barrier in Grand Slams. You can't imagine what this means to me.

"It hope it will be the first of many."

Big things have been tipped for Zverev since he burst into the top 10 in 2017, but until now the 22-year-old has not fully delivered, slipping down the rankings last year to seven from four at the start of the season.

But after a poor build-up to the year's opening Major at the ATP Cup, where he lost all three matches, he worked hard on the practice court and has been in fine touch to finally make a Grand Slam last four at his 19th attempt.

His serve, a key focus of his extended practices, was a weapon once again against 34-year-old three-time Grand Slam champion Wawrinka.

He fired 13 aces against just one double fault, with a first-serve percentage of 80 percent.

It was Wawrinka who came out of the blocks firing, putting immediate pressure on the Zverev serve, getting his returns back to break straight away when the German netted a half-volley.

Zverev won just four points in the opening three games as he struggled to get the measure of Wawrinka, and he was broken again when he shanked a forehand high into the crowd.

The German finally held to get himself on the scoreboard but the Swiss was moving and serving well, unleashing some crunching groundstrokes to take the set in just 24 minutes.

Zverev needed to hold his opening serve in the second set to halt the Wawrinka juggernaut and he rose to the occasion, with his court coverage and groundstrokes raising a level.

It went with serve until game eight when Wawrinka drilled a forehand into the net and Zverev screamed 'C'mon' after his first break of the match, serving out for the set.

A resurgent Zverev rammed home his advantage with an early break in the third set before the wily Swiss hit back. But a poorly executed drop shot again handed the 22-year-old another break and he raced to a two sets to one lead.

Wawrinka, who beat Rafael Nadal in the 2014 Melbourne final, was out of fight and Zverev had him dancing to his tune as he raced to victory, ending the popular Swiss star's bid for a first Slam semi since Roland Garros in 2017.

Comments
Topics mentioned in this article
Stanislas Wawrinka Alexander Zverev Tennis
Get the latest updates on T20 World Cup, check out the T20 World Cup Schedule and Live Score . Like us on Facebook or follow us on Twitter for more sports updates. You can also download the NDTV Cricket app for Android or iOS.