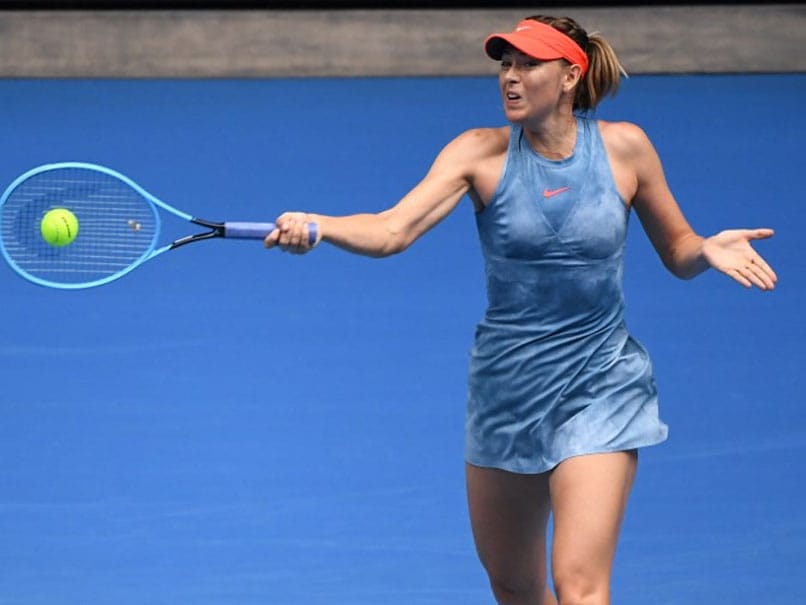 Maria Sharapova stunned defending champion Caroline Wozniacki to sweep into the Australian Open last 16 Friday and join ice man Roger Federer, who clinically disposed of his opponent. The Russian five-time Grand Slam winner, who has struggled since returning from a drugs ban in 2017, was as at full throttle in ending the Dane's dream of a second major title. Sharapova won 6-4, 4-6, 6-3 with the roof closed on Rod Laver Arena and will next play in-form local hope Ashleigh Barty, who bounced Greece's Maria Sakkari, for a berth in the quarter-finals.

"I thought the level was quite high. I knew it would be a tough match," said the 2008 champion, who has been in sizzling form at the tournament as she chases her first Slam title since Roland Garros in 2014.

"These types of matches are what I train for and it was really rewarding to win that last point," added the 30th seed.

Swiss great Federer was also on fire in taming big-serving American Taylor Fritz 6-2, 7-5, 6-2 to stay on track for a third successive title at Melbourne Park and a 21st Grand Slam crown.

On a rain-affected day that delayed play on outside courts, the 37-year-old showed no mercy to the 21-year-old in his 100th match on the centre court in Melbourne.

"I had a really good feeling out here today against someone who can be dangerous," said Federer after reaching the Melbourne fourth round for the 17th time -- more than anyone else ever.

"Taylor played really well. He is going to have many more years on tour playing at this level. It is pretty cool to watch him play."

The double defending champion is gunning for a record seventh Australian title. If he goes on to win the tournament, he will become the first man ever to claim seven or more crowns at two Slams, having already won eight Wimbledons.

Rafael Nadal plays a night match against a player he calls "one of the best in the world", referring to Australian teenager Alex de Minaur who won the Sydney International last week and is on seven-match win streak.

"He's young, very young. He is winning a lot of matches. So let's see. Going to be a tough one," said Nadal, the 2009 champion who is searching for an 18th Grand Slam title.

My brand of tennis

The Czech veteran reached the semi-finals in 2014 and 2015 but is unseeded this year as he returns from a back injury that almost forced his retirement last year.

Barty beat Greece's Sakkari 7-5, 6-1, with the 15th seed yet to drop a set in her best performance at Melbourne Park.

She has won seven of eight matches this month to back up a title victory in Zhuhai late last year to shape up as a dangerous opponent for Sharapova.

"It's getting to the point now where I'm feeling more and more comfortable on the court and can play my brand of tennis, which when I execute I know it works against the best in the world," said a confident Barty.

No Australian woman has won the season-opening Grand Slam at Melbourne Park since Christine O'Neill in 1978.

The 17-year-old, who models herself on Sharapova, will play either eighth seed Petra Kvitova or Swiss Belinda Bencic for a place in the quarter-finals.

Comments
Topics mentioned in this article
Maria Sharapova Caroline Wozniacki Rafael Nadal Tennis
Get the latest updates on IPL 2021, check out the IPL 2021 Schedule and Indian Premier League Live Score . Like us on Facebook or follow us on Twitter for more sports updates. You can also download the NDTV Cricket app for Android or iOS.