Aussie Bernard Tomic guilty of failing to stop for police

Australian tennis star Bernard Tomic was found guilty Monday of failing to stop for police in his high-powered, bright orange sportscar and placed on a 12-month good behaviour bond. 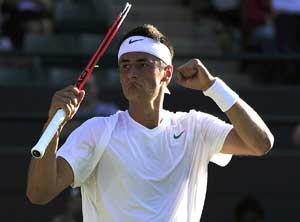 Australian tennis star Bernard Tomic was found guilty Monday of failing to stop for police in his high-powered, bright orange sportscar and placed on a 12-month good behaviour bond.

The 20-year-old admitted three other charges after a series of run-ins with authorities on the same day last January.

They included two counts of breaching his licence conditions and one of failing to keep left of double dividing lines, for which he was fined a total of Aus$1,000 (US$1,036).

Tomic contested the failure to stop charge but was found guilty at Southport Magistrates Court on the Gold Coast.

Magistrate Ron Kilner rejected Tomic's argument that he was confused about what police had wanted him to do and imposed the bond.

Police alleged Tomic repeatedly failed to pull over despite instructions from an officer who was following him, who used his lights, siren, horn and hand signals to try to get the tennis player to stop.

Tomic's lawyer told the court the player was only trying to follow an earlier police directive to go home after being booked for the other offences earlier that day, the Gold Coast Bulletin reported.

Tomic is no stranger to controversy, with police reportedly called to break up a fight between him and a male friend after a night of partying last week.

Comments
Topics mentioned in this article
Tennis Bernard Tomic Australia Cricket Team Cricket
Get the latest Cricket news, check out the India cricket schedule, Cricket live score . Like us on Facebook or follow us on Twitter for more sports updates. You can also download the NDTV Cricket app for Android or iOS.