ATP Cup: Dominic Thiem Beats Diego Schwatzman To Get Back To Winning Ways 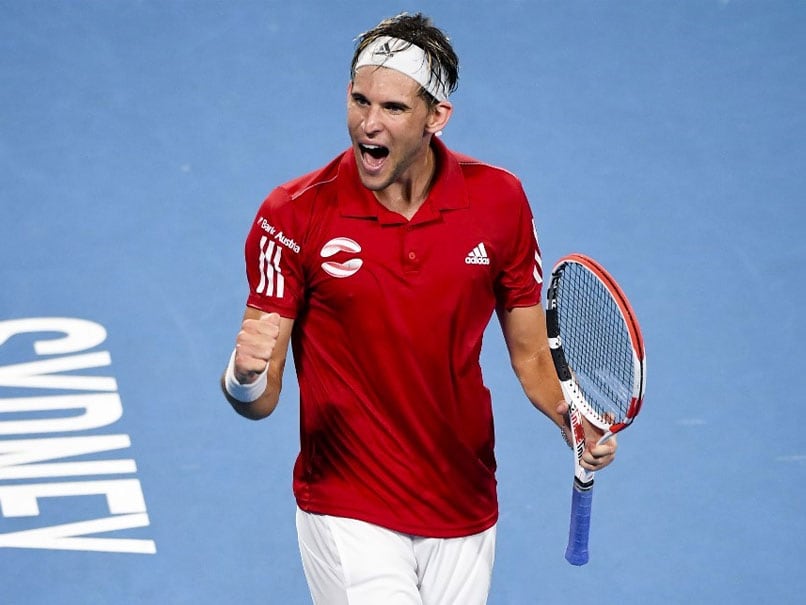 World number four Dominic Thiem bounced back to winning ways Monday after a shock loss in his opening ATP Cup match, beating tenacious Diego Schwartzman to steer Austria to victory over Argentina. Thiem, who won five titles last year and was runner-up to Stefanos Tsitsipas at the ATP Finals, was rusty in his loss to Croat Borna Coric on Saturday. But he found his groove against the gutsy Argentinian, a close friend, hitting 35 winners to grind down the world number 13 for a 6-3, 7-6 (7/3) win.

"I was not satisfied with my first match but there were many good things and I knew from match to match I would improve," Thiem said in Sydney.

"All the matches against Diego, and I think I've had eight or nine on tour so far, they're always great rallies, great for rhythm and it was similar today.

"I enjoyed it a lot and amazing that we won our first tie here," he added.

His victory kept Austria alive in Group E of the inaugural team event after they lost their opening tie to Croatia.

Novak took a bathroom break and was read the riot act by team captain and Austrian legend Thomas Muster, returning to win the next two sets 6-4, 6-4.

"I'm really sorry for the first set, it was a really bad performance. Then I went to the bathroom with Thomas and he gave me a rough speech," said Novak, whose win is set to push him inside the top 100.

"And then I was moving very good, serving good and fighting back in the game."

Marin Cilic was also a winner Monday, totting up his second victory in a row by overcoming Poland's Kacper Zuk 7-6 (10/8), 6-4.

It helped Croatia clinch their tie 2-1 to be in a strong position in Group E after winning their opening showdown against Austria.

Cilic had a forgettable season last year, sliding down the rankings from seven to 39 -- his lowest year-ending position since 2007 -- but is encouraged by his start to the new season.

"I feel motivated. I feel that, you know, 2019 was a season that I could use to learn some new things," said Cilic, whose career high was beating Roger Federer to win the US Open in 2014.

"All those things are good motivation for me to get stronger and now to push a little bit further into 2020.

"I had good time off in the off-season, trained well," he added, after pulling out of the Davis Cup in November with a knee injury.

"I believe this event can definitely set things up nicely for the rest of the season."

Cilic is eyeing a deep run at this month's Australian Open -- a tournament where he lost to Federer in a five-set final in 2018.

Comments
Topics mentioned in this article
Dominic Thiem Tennis
Get the latest updates on ICC T20 Worldcup 2022 and CWG 2022 check out the Schedule, Live Score and Medals Tally. Like us on Facebook or follow us on Twitter for more sports updates. You can also download the NDTV Cricket app for Android or iOS.