At U.S. Open, Bob and Mike Bryan Close In on 100th Doubles Title

American twins Bob and Mike Bryan earned their shot at their 100th doubles title with a 6-4, 4-6, 6-3 victory Thursday over Scott Lipsky and Rajeev Ram in an all-American semifinal in the first match of the day at Arthur Ashe Stadium. 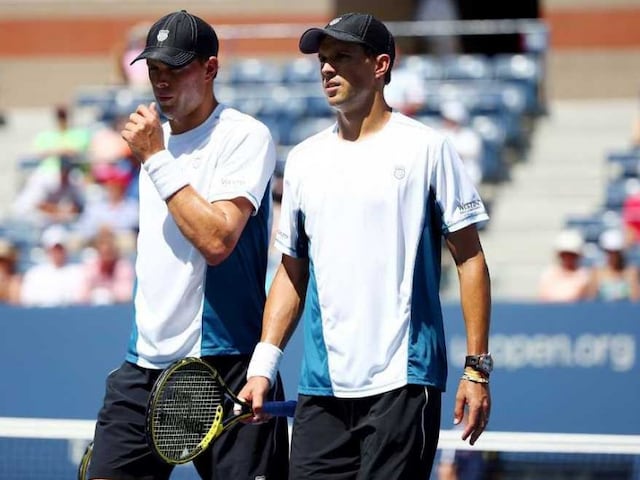 For as many doubles titles as twins Bob and Mike Bryan have won together, they find themselves wishing just a little harder for the next one. That is because the next will be their 100th career victory, and the idea of it coming at the U.S. Open is particularly tantalizing.

They earned their shot at it with a 6-4, 4-6, 6-3 victory Thursday over Scott Lipsky and Rajeev Ram in an all-American semifinal in the first match of the day at Arthur Ashe Stadium. The final Sunday, when they will play Marcel Granollers and Marc Lopez of Spain, will also be their chance to win their first Grand Slam title of the year, continuing their 10-year streak of winning at least one major. Granollers and Lopez defeated the Bryans in the quarterfinals of the French Open this year.

"We're not feeling the pressure to do it in any way," Bob Bryan said. "Because it's going to happen eventually. It's not like, Oh, my God. We're going to be stuck on 99 forever. We're both confident we'll knock down the title at some point. It would be cool to do it here."

Mike Bryan, though, admitted he would spend the next two days trying not to think about the potential milestone.

Everything seems set up perfectly for them in this tournament. First, they won their 99th title at the Cincinnati Masters, the last tuneup before the U.S. Open, by beating Jack Sock and Vasek Pospisil, who beat the Bryans in the Wimbledon final.

Their dry spell is in stark contrast to last year, when the Bryans had won all three Grand Slams going into the U.S. Open, where Leander Paes and Radek Stepanek ended their streak in the semifinals.

"Last year was obviously crazier, and we had this long streak going," Bob Bryan said. "It was just a lot of built-up pressure and kind of angst. We were very disappointed when we lost last year, but a little bit relieved that the whole run was finished and we could just play again without having that on our shoulders. This year feels like an added bonus."

Despite their lack of Grand Slam victories this year, the Bryans, 36, remain the No. 1 doubles team in the world.

But their age and experience have taught them that little can be taken for granted in doubles, where the margin of victory is so small. Against Lipsky and Ram, who were unseeded and were playing in their first Grand Slam semifinal, the first two sets hinged on a single point. It was one tiny break of serve that decided each one. The third set seemed headed for more of the same when the Bryans grabbed momentum after Lipsky double-faulted on break point in the sixth game.

"We just looked at each other and said we can see the finish line here, so let's just go hard for 15 more minutes," Bob Bryan said.

That final stretch included perhaps the best game of the match, a four-deuce showdown at 5-2 with Ram serving that featured a 19-shot rally. While Ram and Lipsky held serve to win that game, the Bryans closed it out emphatically in the next one.

The first women's doubles semifinal was not nearly so dramatic, with Ekaterina Makarova and Elena Vesnina of Russia winning, 7-5, 6-3, over Kimiko Date-Krumm of Japan and Barbora Zahlavova Strycova of the Czech Republic. That victory continued Makarova's incredible run in this tournament. She has reached her first Grand Slam semifinal in singles, where she will play No. 1 Serena Williams on Friday afternoon.

Makarova said the success she has had with Vesnina, with whom she has already won two Grand Slam doubles titles, felt like a bonus.

"We play more for fun because we both focus so much more on singles," Makarova said. "It is so different in doubles. We can talk to each other. We are so open with each other and help each other."

Makarova and Vesnina will play in Saturday's final against the winner of the other semifinal, between Martina Hingis and Flavia Pennetta and Cara Black and Sania Mirza.

Comments
Topics mentioned in this article
Bob Bryan Mike Bryan Scott Lipsky Rajeev Ram Tennis
Get the latest Cricket news, check out the India cricket schedule, Cricket live score . Like us on Facebook or follow us on Twitter for more sports updates. You can also download the NDTV Cricket app for Android or iOS.