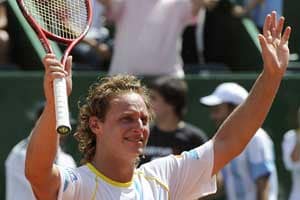 Nalbandian broke Ungur decisively in the eighth game of the first set.

The Argentine won the second just as easily. Ungur rallied to win the third, but Nalbandian imposed himself in the fourth set despite nursing a groin injury.

In the second singles, Juan Monaco was scheduled to face Victor Hanescu.

Comments
Topics mentioned in this article
Tennis David Nalbandian Roger Federer Adrian Ungur
Get the latest Cricket news, check out the India cricket schedule, Cricket live score . Like us on Facebook or follow us on Twitter for more sports updates. You can also download the NDTV Cricket app for Android or iOS.